Caño Martín Peña stretches 3.75 miles linking wetlands and canals to rivers meeting the sea of San Juan Bay, Puerto Rico. In 2004, eight communities along the canal incorporated to protect the canal, and dredge the channel; in 2015, the Environmental Protection Agency and the Urban Waters Federal Partnership issued a nueva vida – new life- vision for the canal. Rebuilding Puerto Rico, after recent hurricane destruction, may increase awareness of canals in flood mitigation. According to Inland Waterways International, canals create economic and environmental benefits, as well as locally-generated electric power. The World Canal Cities Organization recently met in Shaobo, China to explore the Grand Canal, busiest in the world, and building block of the Belt and Road Initiative. Panama and Suez are also notable. The Erie Canal opened the United States to a new era of development; the New York Canal Corporation worked with the World Canals Conference to host the 2017 conference on the Erie Canal in Syracuse, New York. What should the future hold for the world’s canals? How might Puerto Rico lead the way? Enlace and the Caño Martín Peña Ecosystem Restoration Project aim to improve 6,600 acres of the San Juan Bay, and the lives of those near its waters. In the future, canals may help coastal cities weather rising seas, allowing the water in as in Rotterdam. Meanwhile, Puerto Rico looks for help now, and leadership in the future, perhaps including a new vision of canals.

Building the World, “A River Runs Through It.” https://blogs.umb.edu/buildingtheworld/2017/06/16/a-river-runs-through-it/

“Aida,” the opera by Guiseppi Verdi, was written in honor of the opening of the Suez Canal. Now there may be an encore. Egypt is widening the canal with a second lane. Before, 49 ships transited per day; the improved waterway will accommodate 97. Wider and longer, the new Suez Canal will also be faster, cutting southbound transit from 18 hours to 11. Building the improved canal, at a cost of $8.5bn, is expected to generate revenue of $13.5bn by 2023. Suez commands 7% of all global water-transport business; this expansion caused the Suez Canal Authority to term the achievement a “rebirth.” Built by diplomat-developer Ferdinand de Lesseps in 1869, the Suez Canal was dedicated, by firman Article VI, for “tariffs of dues for passage…always equal for all nations, no particular advantage ever stipulated for exclusive benefit of any one country.” Should projects of connectivity, such as canals and tunnels, be chartered channels of inclusiveness and peace? On August 6, one year after construction began, the new Suez Canal opening is planned. Will there be a new opera? “Aida” had a sister; Elton John wrote a second version. What artists of today might celebrate the current widening of Egypt’s gateway waters? Verdi, and John, might advise such gateways include a budget for the arts. Did a postage stamp change history? When Phillipe Bunau-Varilla delivered a postal issue featuring a Nicaraguan volcano, thereby swinging the vote, Senator John Spooner immediately proposed an amendment switching the lease to create the Panama Canal. But now Nicaragua may re-emerge in the competition, as a new transitway wider, longer, and deeper has been authorized.  The Nicaraguan route will also feature a bridge to span the waterway, creating more transportation options. However, denizens of the region, where the new waterway is proposed, are raising questions regarding many aspects including effects on the environment. There still may be eruptions: of protest.

Thanks to Zoe G. Quinn for suggestions on this post. Panama and Nicaragua will both offer canals. Image: wikimedia.

Nicaragua, once intended site for a canal that changed location due in part to a postage stamp, has announced the building of a waterway that will challenge the Panama Canal. The controversial decision weighs benefits of employment and commerce with environmental and other concerns. What might Nicaragua learn from Panama and Suez?

For more on the proposed Nicaraguan canal:

When friends pitched their tent against a high wall to shelter from winds, during their reunion expedition, campfire conversation soon accelerated to boasts and dares. To prove his point, one of the group jumped upon his steed, prepared for a gallop and jumped the wall. No one else dared attempt such a feat. The party’s organizer offered the horse-rider anything in his power to grant. The answer: permission to build the Suez Canal. It was thus that Mohammed Pasha al-Said of Egypt gave authorization to Ferdinand de Lesseps to build the Suez Canal. Many years later, a very different story resulted in a very different canal, Panama. First envisioned by Sesostris, used by the Egyptians in 1380 BCE, connected to the Red Sea a millennium later by Ptolemy Philadelphus, the Suez Canal opened to great fanfare in 1869. Verdi’s opera “Aida” was commissioned to celebrate the waterway.

Historians might trace the first SEZ to 1666, citing the Canal des Deux Mers or Canal between the Two Seas. Connecting the Atlantic to the Mediterranean, the Canal was an economic success; using a medieval model, Pierre-Paul Riquet worked with the French government to make the route an independent fief. Special Economic Zones (SEZ) in more recent times must include Puerto Rico in 1942, and economists point to Shenzhen as the very important first SEZ in China; once a village, Shenzhen grew rapidly when advantageous business and tax laws were granted in the 1980’s to promote commerce. Recent research by the World Bank explores SEZ success factors. It must be noted that many Special Economic Zones involve water locations. The Canal des Deux Mers is not just an economic but also an environmental achievement, preserving and enhancing a waterway that today is a World Heritage Site. Can France’s Canal des Deux Mers inspire new forms of environmentally wise SEZ development? Might the Dutch success of protective dikes and land reclamation be emulated in coastal environments?  Will Frank Davidson and Ernst Frankel prove visionary in proposing a free-trade zone enhanced by artificial islands or reclaimed land from the sea offshore Israel and Jordan? Longest artificial river in the world, China’s Grand Canal may also be the longest construction project in history. Begun by Emperor Wen of Sui (pictured above) and improved by Kublai Khan, the waterway stretches 1,1118 miles (1,800 kilometers). A new program announced in 2002, to reverse the flow of water with a south-to-north diversion to bring hydration from the moist, agricultural south to the drier north, will be completed in 2050. Scholars believe the Grand Canal may have transformed a region into a nation: the inland waterway encouraged communication among diverse groups, leading to standardization of the written form of a language that came to be called Chinese; encouraged trade and exchange; and created a common culture. The destiny of a nation, or a region, may be found in the value, and use, of its water. For more on China, visit http://www.umb.edu/confucius/.

Chambered locks area a common feature on canals around the world. The first one, however, was located on the Grand Canal in China, dating back to 983 A.D. A lock is a mechanism for moving a boat or ship up or down an elevated portion of a river. The boat enters the first chamber of the lock, which is sealed by watertight gates at either end. The water level then rises or falls to the level of the second chamber, depending on the direction the boat is trying to go: upriver, the  chamber fills; downriver, the chamber empties. Once the desired level is reached, the gate in front of the boat opens and the process is repeated. Below is an image of a modern lock from the lower elevation. 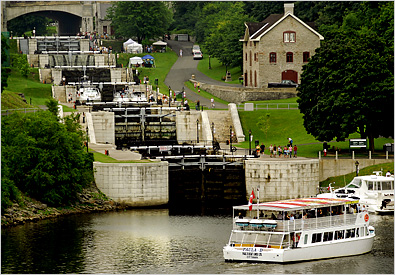 Locks on the Ottowa River, from The New York Times, at nytimes.com.