Baghdad circa 1944, from University of Texas Libraries at lib.utexas.edu.

WHY IRAQ?
Rebuilding after war, reformulating the idea of the nation after dictatorship, reframing the culture to include a new generation’s ideas  — these are among the reasons to explore the future of Baghdad.

The Caliph Al-Mansur wanted to build a new capital to mark the beginning of a new era in the Abbasid Dynasty. Legend says he rode out on a white horse from Damascus and headed into the future. His band of nobles riding along with him reported that when Al-Mansur spotted a location where two rivers came together, he dismounted, unsheathed his sword, and drew three concentric circles in the sand.

“I proclaim this to be Medina al Salaam – the city of peace.”

1) Water – you don’t have enough for the future. This city will grow and you will run out of water for the people.

3) Security – you have a problem waiting to happen. You’ve got three concentric circles in the city. In the inner one, you live. In the next one, the army lives. In the third one, the people. But the people require a market for trading and you’ve allowed that to happen inside the city walls. Thus, thieves and spies can easily slip through. You should move the market outside the city walls.”

The Caliph denied all the charges, but as soon as the Byzantine Emperor left, he redesigned the water, parks, and used his own money to build a new marketplace –  al-Karkh – outside the city walls. 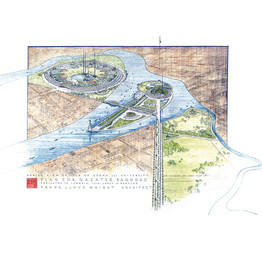 Wright’s plans for Baghdad’s island, from the Wall Street Journal at wsj.com.

When the architect was over 90, he received an invitation from the King of Iraq to design a cultural center. When Frank Lloyd Wright reached Baghdad, he asked to be flown over the landscape; aloft, he spotted an island. Baghdad is at the confluence of the Tigris and Euphrates. It was a “eureka (Greek for ‘I have found it’)” moment. Frank Lloyd Wright believed he might be looking at the original Garden of Eden.  He wanted to rename the island (then called Pig Island) to Edena.

Some of what the architect was looking at called to mind his childhood’s fascination with The Arabian Nights. Under the Abbasid’s fifth caliph, the storied Harun al-Rashid (who ruled from 786-809 CE), Baghdad became the cultural center of Islam, a major trade nexus, and was reputed to be the wealthiest city in the world. Frank Lloyd Wright greatly admired Harun al-Rashid and saw him as a visionary, like himself. Among the designs the architect would recommend was a monument to this legendary ruler.

Alas, in July of 1958, King Faisal II died and the projects were stopped. But we still have Frank Lloyd Wright’s designs.

THE FUTURE OF BAGHDAD

Plan for what Baghdad will look like after rebuilding, from Construction Weekly at constructionweeklyonline.com.

The Caliph al Mansur began building his round city of peace in the year 145 (Moslem Calendar) or A.D. 762 in Christian dating. The astrologer, Nawbakht, selected the auspicious date for this spot located on the western bank of the Tigris River, opposite an ancient Persian village called Baghdad.

In recent years, Baghdad has suffered war and devastation. Now the city must be rebuilt.  Can its traditional past – the gift of God, the city of peace – become the future of this place so important in history and civilization?

Assuredly, this island, bounded on the east by the Tigris and on the west by the Euphrates, will prove to be the crossroads of the universe. Ships on the Tigris, coming from Wasit, Obolla, Ahwaz, Fars, Oman, Yamama, Bahrein, and neighboring countries will land and drop anchor here. It is there that merchandise will arrive by way of the Tigris from Mosul, Azerbaijan, and Armenia, that too will be the destination of products transported by ship on the Euphrates from Raqqa, Syria, the borderlands of Asia Minor, Egypt, and the Maghred. This city will also be on the route of the peoples of Jebel, Ispahan, and of the provinces of Khursan. I shall erect this capital and live it is all my life. It will be the residence of my descendants; it will certainly be the most prosperous city in the world.

Economic Opportunities of New (and Renewed) Cities: The Caliph, founding a new capital, saw possibilities in locating at a crossroads. Baghdad, along with Cyrene, Singapore, Brasilia, Abuja, was one of history’s most important new capitals.  Puerto Rico pioneered the SEZ concept in the 1940’s. In more recent times, new cities, as Specialized Economic Zones (SEZ) such as Songdo, South Korea, are attracting exchange through incentives combined with crossroads locations offering air, sea, and telecommunications access. Economist Paul Romer advocates the creation of Charter Cities; the next one might be in Honduras. What are the advantages today of specialized economic zones promoting exchange?

Rebuilding after Disaster: The University of Massachusetts Boston’s Center for Rebuilding Sustainable Communities after Disasters, founded and directed by Adrenrele Awotana, PhD, sponsors a distinguished conference series regarding disaster recovery (www.umb.edu/crscad). Among the recent focus topics was rebuilding Haiti after the earthquake. But what of the rubble left when war tears through a city, leaving jagged tracks across the land, devastating infrastructure and ripping apart communities? And what of recovery after a long and harsh dictatorship when a new vision can, and must, emerge? Regarding the restoration of not just infrastructure but culture, will the future of Baghdad reverence its origin as “City of Peace?”

Ibn Khaldun, The Muqaddimah: An Introduction to History. Translated from the Arabic by Franz Rosenthal, Abridged and Edited by N. J. Dawood. Princeton, NJ: Bollingen Series, Princeton University Press,  1967.  Source contains excerpt from “Chapter 4: Countries and cities, and all other forms of sedentary civilization.”

“A History of Baghdad,” by Fouad Kazanchi. Baghdad Bulletin: Dedicated to Covering the Redevelopment of Iraq. Published 16/7/2003.
http://www.baghdadbulletin.com/pageArticle.php?article_id=55.

“The Golden Age of Arab and Islamic Culture,” Chapter 5. By Gaston Wiet. Baghdad:Metropolis of the Abbasid Caliphate. Norman: University of Oklahoma Press.
http://www.forham.edu/halsall/med/wiet.html.

*“Islamic Art, Architecture, and Culture,”ArchNet.
http://archnet.org/courses.
This contains a listing of universities and specific professors who were offering courses on these topics in 2004.

*“A History of Baghdad,” by Fouad Kazanchi. Baghdad Bulletin: Dedicated to Covering the Redevelopment of Iraq. Published 16/7/2003.
http://www.baghdadbulletin.com/pageArticle.php?article_id=55.