Entrance on the Italian side of the Mont Blanc Tunnel.

Nature gave central Europe a few topographical features that hindered the development of transit routes for the expansion of trade and exchange. For example, while great for skiing between villages, the mountain chain standing between France and Italy while extending into Switzerland, the Alps’ highest point is Mont Blanc (White Mountain in English) reaching 4,807 meters (15,771 feet) into the sky.

A nobleman who didn’t like paying taxes built the first recorded Alpine tunnel. Ludovic II, the Marquis of Saluzzo, disliked paying tolls to use passes (built by enterprising Swiss who rigged up structures like the suspended roadway along Schöllenen Gorge which together with a bridge created a medieval trade route that shortened the north-south transit across what became know as the Gotthard Pass). Annoyed when he had to ante up a toll every time he left his marquisate, he hired miners already digging around Piedmont, to shovel him a route underground. Built between 1475-1480, it was 75 meters long (247.5 feet) and 2.5 meters wide (8.25 feet) and became known as the Pertus du Viso (Hole of Viso in English).

In 1953, France and Italy agreed to jointly build and operate a motor-vehicle tunnel between Chamonix-Mont Blanc in France and Courmayeur in Italy. Called the Mont Blanc Vehicular Tunnel, the stretch opened 12 years later. It measures 11.6 kilometers (7.2miles) in length, two-thirds of which lies in France. It is one of the longest vehicular tunnels in the world. The tunnel is 10 meters wide (32 feet). It is a single-bore, two-way tunnel.

The initial agreement was between France and Italy but it was soon clear that Switzerland would benefit economically as well, and so a third country was included in the financing and administration. While the initial Mont Blanc Convention of March 14, 1953 addressed issues like ownership of discoveries unearthed (article 4) or provisions for governance (article 5), it was article 8 that covered responsibility for tunnel operations. Article 9 notes that any specialized personnel responsible for ventilation are an exception to the rule that the project must have an equal balance of French and Italian workers. The second document, signed in May 1953, exemplifies the difference between planning and building. A new player appears, the state and city of Geneva, Switzerland. In Article 12, it is stated: “The French and Italian construction companies shall obtain material, equipment and other supplies in Switzerland equivalent to approximately half the amount of the subsidy of the State and City of Geneva insofar as price and exchange conditions permit.” Also mentioned for the first time in the Procès-Verbal, private investors.

The Mont Blanc Tunnel ended up with a cost overrun of at least 100 percent because the costs of construction were virtually impossible to estimate correctly. Tunneling through the Alps required innovation. Some had to be tested on-site and then improved.

However, when the Mont Blanc Tunnel opened in 1965 it was an instant success. The route was a boom to the local economies of France and Italy, but it may have been too successful. Originally designed for 350,000 vehicles per annum, instead it was accommodating 2 million by the late 1990’s. It was not long until a weakness in the system would turn in to danger. 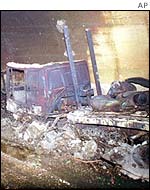 Aftermath of the fire, from bbc.co.uk and Associated Press.

A number of truck fires have occurred in the Mont Blanc Tunnel, but in March 1999 a Belgian truck carrying flour and margarine caught fire in the middle of the tunnel. Temperatures exceeded 1,000 C (1,800 F). Asphalt quickly melted. The thunder of popping tires echoed. It was a conflagration in which 40 people perished, most succumbing to smoke inhalation from fumes blown through the tunnel. The tunnel, which carried nearly half of the truck traffic between France and Italy, was closed until 2002.

LESSONS LEARNED FOR THE FUTURE

The Mont Blanc Tunnel is a dramatic illustration of a worldwide failure that has not yet been sufficiently addressed. Most traffic accidents are caused by collisions, and collisions inside tunnels are particularly dangerous. While we have had roads since the Romans and cars since Henry Ford, we have not solved the problem of traffic injuries and tragic fatalities. Several tunnels – for instance the 1920s tunnel across the St. Gotthard – have been equipped to carry cars and trucks on railway flatcars. But road tunnels have continued to be built without safety benefits of rail or pallet.

The Palleted automated transit system designed by David Gordon Wilson at the Massachusetts Institute of Technology resulted from a General Motors grant to identify possible improvements in road safety. But is there a challenge to the public and public-relations industry to generate political support needed if the problem of highway safety is to find commensurate redesign and reconstruction support? The Channel Tunnel, although privately financed, offers the safety of transport on railway flatcars.

THE MONT-BLANC TUNNEL CONVENTION OF 1953

Convention between Italy and France Concerning the Construction and Operation of a Tunnel under Mont-Blanc, Signed at Paris on 14 March 1953.

The President of the Italian Republic and the President of the French Republic, recognizing that the establishment of permanent road communication between the two countries by means of a tunnel connecting the valleys of Chamonix and Courmayeur through Mont-Blanc would be in their common interest, have decided to conclude a convention to this end…

The two Governments undertake to construct, in due course, the sections which are to link the tunnel entrances with the Italian and French highway systems.

The concessionary companies shall assign the operation of the tunnel to an incorporated company and each shall subscribe one-half of the capital of such incorporated company, the Board of Directors of which shall be composed of an equal number of representatives of the concessionary companies. The Chairman of the Board of Directors, who shall be appointed for five years, shall be of Italian and French nationality alternately.

Any dispute between the two Governments concerning the interpretation or application of the present Convention or concerning one of the concessions granted under the terms of article 2 shall, if not settled within a reasonable period by diplomatic or other amicable means, be submitted to an arbitral tribunal whose decision shall be binding.

IN WITNESS WHEREOF, the respective Plenipotentiaries have signed the present Convention and have thereto affixed their seals.

Sharing Infrastructure Linking Countries: Can the agreement between France and Italy to share responsibility for a fixed link between their two countries reveal approaches that might be used if a tunnel under the Bering Strait were to link Russia and the United States?

Safer Bottoms and Beautiful Tops: An accident in the Mont Blanc Tunnel killed 40 people. Are there safer ways to build vehicular tunnels, perhaps using a pallet or rail option to improve safety? Once a tunnel is built, can its surface become a park such as the Greenway on Boston’s Central Artery?

Davidson, Frank P. Macro: A Clear Vision of How Science and Technology Will Shape Our Future. New York: William Morrow, 1983.

For a chronology of the Mont Blanc Tunnel, with bibliography before and after the 1999 accident, see the International Database and Gallery of Structures at http://www.structurae.net/.

For background on rail tunnels in Switzerland and Alpine tunnels in general, see work of Simon Low and Herbert Einstein at
http://www.geotimes.org/feb03/feature_tunnel.html.

For provisions against tunnel fires in New York, see http://www.panyj.gov/pr/116-99.html.