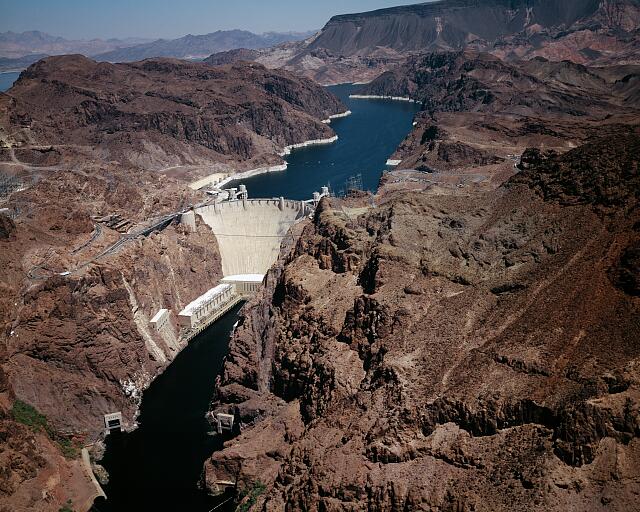 Hoover Dam, from Library of Congress at loc.gov.

The Colorado River, creating hydroelectricity for the bright lights, big city of Las Vegas, Nevada, is also the source of water for seven U.S. states, as well as Mexico, and the Navajo. Although the Hoover Dam was one of the largest river-development projects in the world, it was not the first. Consideration must be given to the ancient Marib Dam. Dating from around 1050BC, the dam was maintained for centuries in what was called Saba in Arabic or Sheba in the west, whose queen is legendary. Marib Dam was built in a corner of the Arabian Peninsula now known as Yemen. Hoover Dam maintains two distinctions: it is the first example in history of a comprehensive interstate compact to deal with allocation of water rights, and the massive project remains a model of success, completed under budget and two years early. As water and electricity become increasingly valuable, can Hoover Dam inspire a new generation?

The Hoover Dam is actually a system of more than 20 dams along a 2,330 kilometer (1,450 miles) river, affecting an area 632,000  square kilometers (242,000 square miles), with so much concrete as to build a wide sidewalk around the earth at the equator. During peak periods of electrical demand, enough water runs through the generators to fill 15 average-size swimming pools in one second. All of this culminates in the iconic shape of Kauffmann’s arch. Was it any wonder that artist Oskar J.W. Hansen likened the Hoover Dam to the Pyramids?

Additionally, the mighty Colorado River had to be diverted and made dry before work on the dam could begin. Diversion tunnels were blasted through the walls of the canyon by competing teams – one of the many successful organizational ideas of the builders. Blasting and piping teams formed into a kind of intramural tournament; workers were so motivated to win the contest that the tunnels were completed early. Even before the dam’s construction began, families flocked to the thirty-mile stretch between Las Vegas and the worksite. There were few other employment opportunities while people waited, but Murl Emery came to the rescue. The merchant opened up a general store in a worker camp informally called “Ragtown.” Even when the project started up, Emery allowed families to pay what they could and take what they needed; the balance would be put on account. Emery trusted the workers, and they returned his trust: no one ever failed to pay up. Emery’s remarkable business carried on commerce without government subsidy or contractor support.

Forming a consortium with the practical name of Six Companies, Inc., the partners moved as one. Executive team provisions such as incentives written directly in the contract with bonuses for completion were balanced by fines for running beyond construction deadlines. Work units took incentive provisions very seriously, working both day and night. Innovations abounded including project segments that rivaled Henry Ford’s assembly line. Another reason for success? Legions of recently unemployed laborers who had lost their jobs during the Great Depression. Small armies of workers, whole families along, moved to a certain nearby town called Las Vegas. In many cases, they were free to live on-site, a key to success in large-scale projects.

A jumbo, from the US Department of the Interior at usbr.gov.

The Jumbo: Workers and management were highly motivated to make or beat project deadlines, thereby winning bonuses. This quest for success gave rise to innovation. For example, the jumbo truck — a vehicle fitted with layers of platforms on which 20-30 workers stood  bracing themselves as the truck rumbled along the canyon.The truck would ride right to the face of a canyon cliff; the sounds that ensued were deafening — everyone would drill at once, making holes that were then stuffed with blasting powder. Entire sections could, in this way, be demolished in one blast. A ton of dynamite was planted every 14 feet. Multiply that method by eight, for that was the number of jumbo trucks working simultaneously. Electric lights were added to the rigs so drilling could rock the canyon around the clock.

High Scaler monument, from the US Department of the Interior at usbr.gov.

Aerialists: The fabled high-scalers who performed acrobatic feats from aloft were legendary. Local knowledge is powerful; Native Americans familiar with the intricacies of the canyons became fabled high-scalers. These daredevils could have trained for modern day Circe de Soleil. The high-scalers dangled precariously from ropes, scraping off loose rocks remaining after blasting. Well-paid and highly respected, the daredevils’ lofty antics were immortalized by photographers.

Cool: Construction of the dam required 3.25 million cubic yards of concrete; even more was needed for the power plant. Workers built several concrete plants that ran so constantly that a bucket of concrete went out on the overhead cable delivery system every 78 seconds. But there was one problem; it was calculated that it would take 100 years for the concrete to cool. A brilliant innovation resulted: a system for cooling concrete by pouring it in rows and columns that were cooled by 582 miles of steel pipes pumped with ice water. Afterwards, the pipes themselves were emptied of water and filled with concrete, thus strengthening the structure.

Upper and lower basins, from the U.S. Bureau of Reclamation, at usbr.gov.

If management of the construction was an unparalleled success, government legislation left a few loose ends that soon entangled. The Colorado River Compact, legislation that preceded the building of the dam, authorized seven states to work together to decide how to apportion shared water. At first, determination was linked to irrigable land within each state, but later the decision to draw a “line” between the Upper and Lower Basins and group the states into two camps seemed the sensible thing to do. Upper Basin states consisted of Wyoming, Colorado, Utah and New Mexico; Lower Basin contained California, Arizona and New Mexico. Upper Basin states would be required to deliver 75 maf (million acre feet, a water-measurement term) each 10 years, a period long enough to even out the natural variances caused by flood or drought. Calculations by the Reclamation Bureau showed that flows could range from 4.4 maf to 22 maf, with 16.4 maf the norm. But problems were downstream.

Currently the eighth-largest economy in the world, California was the elephant in the room during 1920 negotiations by the seven states along the basin of the Colorado River. It was apparent to all seven parties that as California grew, that state’s development might impact the other partners. The agreement signed in 1922 was challenged two decades later; the legal case of Arizona v. California lasted 11 years and cost $5 million, one of the most contentious and expensive litigation cases of the time.

The Colorado River Compact left out two parties, Native Americans and Mexico, omissions that would come to haunt. Regarding Native Americans, Herbert Hoover made certain they were at least mentioned: Article VII stipulates, “Nothing in this compact shall be construed as affecting the obligations of the United States to Indian Tribes.” It is possible this phrase refers to the 1903 Supreme Court decision in Winters v. United States, which stated that Native American tribes had water rights whether they were using the water or not, and that their rights were related to the placement of their reservations. Sixty years later, in 1963, the Supreme Court intervened to define the rights of five Native American reservations in the Lower Basin. Of particular note are the Navajo, whose 25,000-square-mile reservation is entirely within the territory of the compact. At a 1997 Colorado River Symposium, an attorney for the Navajo observed that tribe’s water rights approach the five-maf level. Nothing prevents the Navajo from selling their water; while American states may be subject to federal law, Native American tribes remain sovereign entities protected by the Winters law.

For the first time in public construction history, the federal government mandated a policy of diversity, requiring that African Americans be hired to work on the project. This little-recognized fact makes the Hoover Dam one of the most important achievements in United States’ history.

Hoover Dam is also significant because it represents a time when government, business, and community alike believed in shared power and shared resources. Energy and water would be created and distributed to the betterment of all. Communicating such a vision required art.

After the dam was designed from an engineering perspective, Gordon B. Kauffmann reworked the vision to further elevate it to working art. Kauffmann proposed a system of plain surfaces alternating with shadows. In addition, Oskar J.W. Hansen was commissioned to create two large cast panels of concrete showing the aspects of flood control, irrigation, power, and a history of the area. It was Hansen who included a star map, set in the floor of the dam, which compares the Hoover Dam to the Pyramids.

Be it enacted by the Senate and House of Representatives of the United States of America in Congress assembled. That for the purpose of controlling the floods, improving navigation and regulating the flow of the Colorado River, proving for storage and for the delivery of the stored waters thereof for reclamation of public lands and other beneficial uses exclusively within the United States, and for the generation of electrical energy as a means of making the project herein authorized a self-supporting and financially solvent undertaking…

November 24, 1922
Nothing in this compact shall be construed as affecting the obligations of the United States of America to Indian tribes.

Native Americans and the Future: Native Americans control some of the water of the Colorado River, and have rights to sell it. The Navajo have 5 maf annually; this may be compared to 1.5 for all of Mexico. Recently, tribes used their special status to build casinos. As water becomes scarce, will the Walapai, Havasupai, and Navajo become leaders in water markets?

World Water Academy: With Lake Mead (created by the Hoover Dam), and Lake Chad in Africa, shrinking, is it time to found a college for water study? An early example might be the first of the Grandes Ecoles in France, formed in 1753 under Louis XV, the Ecole des Ponts et Chaussées. This “School of Roads and Bridges” still exists. But there are gaps in the world’s education system, and water planning and management might be one. Should China found a World Water Academy as that country works towards completion date of the Grand Canal in 2050? Or might the University of Massachusetts Boston, located on the Atlantic as what Provost Winston E. Langley terms a “liquid bridge,” lead the way?

For more on the Hoover Dam as a curved gravity structure:
http://www.pbs.org/wghb/buildingbig/wonder/structure/hoover.html.

For construction of the dam, see:
http://www.arizona-leisure.com/hoover-dam-building.html.

For an article about Oskar Hansen and Gordon Kauffmann by Julian Rinehart, see:
http://www.usbr.gov/lc/hooverdam/history/articles/rhinehart.html.

For more on the ancient Marib Dam, see:
http://www.yementimes.com/98/iss52/lastpage.htm.