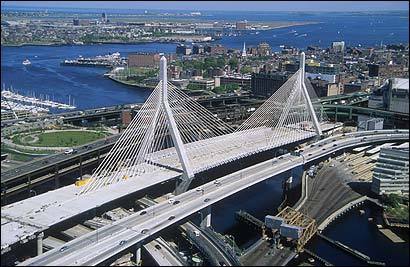 Metaphor of connection, spanning rivers, arching over highways – bridges are engineering with the wings of art. As simple as a log thrown across a creek, bridges evolved to complex structures as early as the 13th century BC in Greece; the oldest and largest stone-arched bridge in the world is the Zhaozhou, built during the Sui Dynasty in China. In China’s Forbidden City, there was a bridge over which only the emperor could walk. Romans perfected the arch, building bridges and aqueducts (the water channel is a form of bridge). Rome’s bridges were so important that their authorizing power resided in the Vatican: pontiff means pontifex or bridge-builder. London Bridge opened a gateway to that great city, offering travelers one of the first shopping malls in history, as well as a vivid gallery that displayed Thomas Cromwell in 1540. Brooklyn Bridge is the subject of more poetry than any other engineering achievement. Boston’s Public Garden is home to the world’s smallest suspension bridge under which swan boats glide. Meditation gardens often have moon bridges that beckon across a lagoon or pond. The very act of crossing a bridge is said to transport one to a different state of being.