WHY BRAZIL AND PARAGUAY?

Nature resides in regions, not countries. Can Brazil and Paraguay set an example by sharing of the Paraná River through Itaipú? Taller than a 55-story building, the hydroelectric power plant was designated as one of the seven wonders of the modern world. Iron and steel used in the project would have built 380 Eiffel Towers. Itaipú inspired the American composer, Philip Glass, to create a opera of the same name, using the language of the indigenous Guarani people in whose tongue the word means “singing stone.” When the Itaipú opened, the Brazil Symphony Orchestra gave a concert inside one of the generators. Itaipú provides 78% of Paraguay’s energy and 25% of Brazil’s, but more may be needed. At the 2012 Rio summit, discussion of a proposed dam on the Amazon proved controversial. What is the future of hydroelectricity?

Map of Itaipu’s location, from bbc.co.uk.

Brazil and Paraguay share a river and now a hydroelectric powerhouse built by the two countries as a joint undertaking. Itaipú addressed a problem that had plagued the region – drought. Water for drinking, irrigation, and industry became critical as the region’s population expanded, but politics conflicted with economics.  Governmental change swept Brazil in 1964; authoritarian rule transformed Paraguay in 1966. In that same year, the Brazilian military seized control of the Sete waterfalls on the Paraná River – a natural resource deemed native to Paraguay. But cooperation prevailed. On June 22 of that same year, the Act of Iguaçu brought agreement between General Alfredo Stroesner of Paraguay  and General Humberto Castelo of Brazil to jointly study the resources of their shared waterway with the goal of renewable hydroelectric power for these river partners. Electricity would be divided equally, but Paraguay would be required to repay Brazilian financial assistance within 50 years by selling its surplus power – at cost – only to Brazil. In 1973, the Itaipú Treaty was signed.

The treaty created a bi-national entity with several stipulations including:

+ All meeting records and notes would be in both Portuguese and Spanish
+ Two central headquarters would be established in Brasilia and Asuncion
+ Equal representation on the Governing Council and Executive Directorate
+ Equal share of electricity
+ Equal royalties
+ No taxes on the new joint entity
+ No taxes on electric services produced
+ No taxes on materials and equipment, even if obtained from a third country.

There was considerable attention to aspects described as “(a) Diplomatic and consular; (b) Administrative and financial; (c) Employment and social security; (d) Taxes and customs; (e) Passage across the international frontier; (f) Urban and housing; (g) Policy and security; (h) Control of access.” One thing was missing – no environmental impact statement was required before receiving permission to build.

However, animal life was protected because one stated purpose of the project was to provide drinking water for cattle. As a result, when the project was built and the reservoir filled, seven distinct habitat areas were created to preserve native fauna as well as flora. Some animals were featured for the edification of tourists in Iguaçu National Park. But early stages of construction destroyed some species and habitats. The project also damaged rainforest areas. When trees that were home to parrots were felled, there was devastation of birdlife. One year after the 1973 Treaty was signed, it was reported that 85% of the forest on the Paraguayan side of the Paraná River had disappeared. Later, both Paraguay and Brazil participated in reforestation programs in an effort to save some species from extinction.

The project is a complex of spillways and dams stretching 4.8 miles (7.7 kilometers) across the river. The centerpiece is the hollow concrete gravity dam over 3,000 feet (1 kilometer) long and 643 (196 meters) high. The huge generating units (one so large the Brazil Symphony Orchestra performed a concert within) are each rated at 700 megawatts. The first generator was commissioned in 1984, and the 18th went on line in 1991. Two more came in 2002. A reservoir 100 miles (170 kilometers) long keeps stored water. The scale is massive: for example, creating the diversion channel, which measures 490 feet (150 meters) wide, 1.3 miles (2 kilometers) long, and 300 feet (90 meters) deep, required three years. Financing was funded by loans with the Brazilian government as guarantor. More than half a million people were resettled as a result of the project; 30,000 were employed.

As the world gathered in Rio twenty years after the first world summit (1992) to debate the state of the environment, a concurrent event took place: +23. That lower-profiled gathering marked twenty-three years since the indigenous people of the Xingu River first protested the Belo Monte Dam. The Xingu people were not alone: musical star Sting and other celebrities joined the effort to block the dam in 1989. 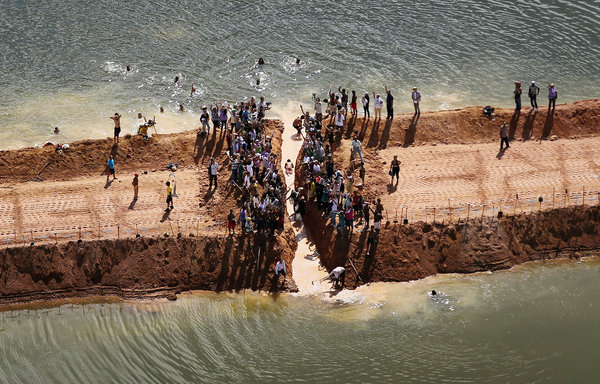 A group of protesters break through a temporary earthen dam, from The New York Times at nytimes.com.

Damming the Xingu River, 2000 miles north of Rio, may bring power to 27 million homes, and create thousands of jobs, but Amazon Watch, a United States activist group, fears most benefit will be industrial, not residential. Expert Philip Fearnside of the National Institute for Research in Amazonia notes that an area of the Xingu River below the proposed reservoir will be reduced to a stream while the reservoir itself will require flooding a large part of Altamira, a city of 130,000. In addition to the displaced residents of Altamira, the Paquiçamba and Arara territories of the Juruna and Arana indigenous peoples will be affected, and more than 20,000 people will be left homeless in Altamira and Vitoria do Xingu. Fearnside, a biologist at the institute since 1978, warns that flooded forests will produce methane, a gas 25 times more powerful than CO2. But the government may proceed even though protestors are now joined by media moguls including James Cameron whose movie Avatar presented environmental issues brought to life in the story of Pandora. If completed as planned, Belo Monte will be the world’s third-largest hydroelectric dam.

ANNEX A: STATUTE OF “ITAIPU”

Chapter I. DENOMINATION AND PURPOSE

Article 1. ITAIPU is a bi-national entity established under article III of the Treaty signed by Brazil and Paraguay on 26 April 1973, the parties constituting it being:

Article 2. The purpose of ITAIPU is the hydroelectric utilization of the water resources of the Paraná River owned in condominium by the two countries, from and including the Salto Grande de Sete Quedas, or Salto del Guaira, to the mouth of the Iguassu River.

Article 3. ITAIPU shall be governed by the rules laid down in the Treaty of 26 April 1973 in this Statute and in the other annexes.

Article 4. ITAIPU shall, in accordance with the provisions of the Treaty and the annexed thereto, have the juridicial, financial and administrative capacity and the technical responsibility to study, plan, direct and execute the works for which it was established, bring thence into service and operate them, for which purposes it may require rights and undertake obligations.

– From Treaty Series: Treaties and International Agreements Registered or Filed and Recorded with the Secretariat of the United Nations, vol. 923 (New York: United Nations, 1981), 92-110. See also Building the World, pp. 717-732.

Shared Infrastructure Linking Countries: Both Itaipú and the Channel Tunnel involve two countries who share governance, financing, natural resources, and profits in managing their joint achievements. As the world grows beyond definitions of nations to a broader view of regions, how can shared environment and infrastructure play a role in safeguarding the future?

Belo Monte: Another Brazilian dam and hydroelectric project, Belo Monte, has attracted global attention including involvement by Sting, James Cameron, and Sigourney Weaver. How do stars and popular artists influence global events? Can the voices of the future direct current politics?

Kec, Margaret E. “Amazonia and Environmental Politics.” In Tulchin, Joseph S. and Heather A. Golding, eds. Environment and Security in the Amazon Basin. Washington, DC: Woodrow Wilson International Center for Scholars, 2002, 47. Provides a discussion of Robert Panero’s and Herman Kahn’s plan to link all the rivers to make “great lakes” in South America.

For information on the Itaipú project, see: http://www.itaipu.gov.br.

For an article by Altino Venture Fihlo, “Itaipu: A Binational Hydroelectric Power Plant, Its Benefits and Regional Context,” see
http://www.dams.org/kbase/submissions/showsub.php?rec=ins237.

For a snapshot of key facts, see:
http://www.pbs.org/wgbh/buildingbig/wonder/structure/itaipu.html.

For comments on the project by the International Research Institute for Climate and Society, see:
http://iri.columbia.edu/.

For an online copy of the authorizing document, see:
http://www.internationalwaterlaw.org/RegionalDocs/Parana2.htm.

For an overview of dams and the environment, see: http://www.unep.org/dams.