One of Japan’s “bullet trains” in action.

With exemplary speed, when Japan approved a 1959 plan for high-speed rail, groundbreaking ceremonies took place just one week later. The Japanese pioneered high-speed trains (more than 200 kilometers or 125 miles per hour) subsequently built in several European nations and elsewhere. France’s TVG and Eurostar’s Paris-London Channel Tunnel trains are among the reasons new trains that have changed the way Europeans travel. No longer are airplanes the mode of choice for short hops.

Trains were and are well suited to Japan’s strategic priorities. The island nation’s lack of petroleum reserves, coupled with determination not to become too dependent on outside sources of energy supply, motivated Japan to conduct research on high-speed, low-energy transport. Rail and hybrid cars became part of Japan’s strategy to develop innovations that use less energy. As a result, hybrid cars such as those produced by Honda have influenced the global auto industry.

Smoke from the disaster at Fukushima, by ABC tv/EPA, from guardian.co.uk.

In the same quest, Japan invested in nuclear energy. But the disaster of 2011, the Fukushima earthquake/tsunami/TEPCO nuclear failure, has opened a new discussion in Japan on nuclear strategies.

While Japan may have begun high-speed rail, China is taking train transportation to the next level. For example, in Changchun, passengers ride one of the fastest trains in the world; the 380A travels at 380 kmph (236 mph). Commerce between Beijing and Shanghai have benefitted from improved rail: what used to take 19 hours ten years ago now is a trip less than 4 hours. City-to-city travel that allows a passenger to have dim sum for lunch in Shanghai and return to the capital for Peking duck in the evening is one of the reasons why China prospers.China is now positioned to bring vision to reality, connecting all provincial capitals and cities that have populations over 500,000. The goal is an “8-hour transport circle” in which Beijing can be accessed by every important center in China within 8 hours. The “8-hour” network will be available to 90% of the population. At a recent China High-Speed Rail summit, it was announced that RMB 2 trillion (US$293 billion) has already been allocated for the decade 2010 to 2020. (Building the Future, “Transportation,” 37-39).

There is a saying in business: “Good, fast, cheap – pick any two.” But Japan’s rail achievements made all three possible. When the Japanese government raised US$640 million to begin construction of the Shinkansen (the name literally means “New Trunk Line,” while the more common “Bullet Train” is Dangan Ressha in local parlance), one of the goals was profitability. Accordingly, the first line planned was the Tokyo-to-Osaka, timed to be ready for the 1964 Tokyo Olympics. Just 10 days before the opening ceremony of the five rings, the line opened. It was profitable immediately.

Consumer-oriented innovations have always been a part of Japanese rail. Earliest trains were color-coded for classes of service. Interiors of first-class cars were pristine white, mid-price cars were decorated in blue; red meant economy. By 1899, food was served in first class. Just one year later, sleeping cars were introduced. In that same year marking a new century, “Tetsudo Shoka” (Railway Song) was published, marking the entry of railroad experience into Japanese culture and folklore. A new century also meant a new era of equality: 10 women became employees on the government railway. Borrowing from Germany’s innovation, the first Japanese automatic ticket machines appeared in 1926; automatic doors came soon after. But the most enthusiastic public embrace of the Japanese train system may have been stimulated by a PR campaign: Name That Train. In 1929 Japan held a naming contest for some new trains; in September, the winners were announced as Fuji and Sakura took their place in history. 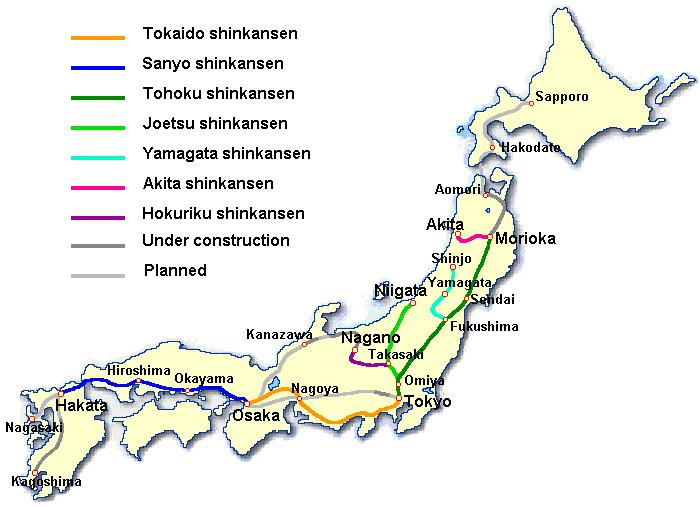 Shinkansen map, from University of Hawaii at hawaii.edu

Japan consists of a collection of islands, on some of which are mountains. So tunnels figured into the design of the rail system. One tunnel on the Tokyo-Niigata line is 14 miles (22.5 kilometers) long. Tunnels account for over half of the line between Okayama and Hakata, which runs under Shimonoseki Strait to Kyushu. One of the most remarkable milestones of the Shinkansen was the construction of the Seikan Tunnel in 1988, a 32.3 mile stretch that cost $US5.6 billion. The cost relates to the 24 years required to complete the Seikan Tunnel because of the considerable land-composition challenges that had to be met. Tunnels for Shinkansen not only increased transport system speed but may have helped to avoid dangerous ferry crossings such as that between Kahodate and Aomori. Many maritime accidents occurred there including the tragic sinking of the Toya Maru when over 1,000 people perished. Like its later French/English cousin, the Channel Tunnel that also offers an alternative to a traditional ferry route, Shinkansen’s tunnels help to promote safety. In fact, each mile of Japanese rail track is inspected every 10 days.

Shinkansen has a perfect passenger-safety record, with not one death among passengers from 1959 to 2002 when the 382 billion passenger mark was achieved. However, an earthquake derailed a train on October 23, 2004 but all 151 passengers aboard the Toki 325 travelling from Tokyo to Niigata safely detrained and walked back to the Nagaoka station for six kilometers (3.7 miles). While that accident was not in a tunnel, it is reminiscent of the safe evacuation of Eurostar passengers who were able to exit the train via a service tunnel built as part of the Channel Tunnel’s original 1959 design. Trains have long been associated with cuisine. Japan perfected the ultimate box lunch in the introduction of a certain snack. It was a new spin on an old tradition. Japanese warlord and medieval samurai, General Oda Nobunaga, is said to be the creator. The story is that the General had a big party. So many people came to his castle that there was not room enough for guests to dine at tables. Seeing the situation with a military eye for both “int” and “ops,” General Nobunaga strode into kitchens, commanded the chef to create tiny balls of sushi rice decorated with patterns of sesame seeds and pass them on elegant trays. He coined a term: bento. Perhaps General Nobunaga was familiar with the snack medieval Japanese falconers carried in their burlap sacks: dried rice balls that were hydrated in mountain streams for consumption during rest breaks on the hunt. Drawings of travelers, munching rice balls, can be found in early 10th century Monogatari. Nobunaga’s upgrade was a fashion statement. By the Edo era (1603-1868), bento became the preferred theatre treat; during intermission, arts patrons enjoyed rice balls with the same sesame seed decoration. So, it was no surprise that when Japanese train travel began in the Meiji era (1868-1912), a new version of the ancient snack was debuted. In keeping with the innovation of trains, an adjective was added: ekiben (station) bento (often shortened to eki-bento). Technology has advanced from the days of falconers and samurai: now there is a form of ekiben in a self-heating container. Will America’s Amtrak upgrade cuisine to the level of fashion and art?

Purpose – Article I
In view of the importance of the role played by a high-speed transportation system for the comprehensive and extensive development of the land, this Law shall be aimed at the construction of a nation-wide high-speed railway network for the purpose of promoting the growth of the national economy and the enlargement of the people’s sphere of life.

RUSSIAN RAILWAY SERVICE CORPS: Providing an Honorable Discharge for the Members of, from the Military Service of the United States: Hearing Before the Committee On Military Affairs, House of Representatives, Sixty-Seventh Congress, Second Session. On S. 28. Tuesdays , January 17, 1922. Washington: Government Printing Office, 95363, 1922.

Mr. Poole. The actual beginning of their work was in March, 1918, and they have continued in diminishing numbers up to this time?
Mr. Quin. They had on the American uniform, did they not?
Mr. Poole. I understand so.
Mr. Crowther. They were all officers?
Mr. Poole. Yes, sir.
Mr. Parker. In the telegram of Mr. Felton, of February 21, 1918, he said that these men were not officers of the United States Army but held special certificates of identity. Have you a copy of that certificate?
Mr. Poole. I presume that could be obtained. A copy of that certificate appears as Exhibit A. on page 21 of the former hearing.
Mr. Quin. These men left fine jobs over here, and did not go over there simply on a venture, or in order to be traveling?
Mr. Poole. My own personal impression is that this was during war times, when everyone wanted to do his bit, and here was their opportunity.
Mr. Quin. They were performing a valuable service?
Mr. Poole. Yes, sir.

– RUSSIAN RAILWAY SERVICE CORPS: Providing an Honorable Discharge for the Members of, from the Military Service of the United States: Hearing Before the Committee On Military Affairs, House of Representatives, Sixty-Seventh Congress, Second Session. On S. 28. Tuesdays , January 17, 1922. Washington: Government Printing Office, 95363, 1922.

Olympics: Japan funded and built Shinkansen because of a long-term strategy on energy, spurred on by a short-term opportunistic tactic – the Tokyo Olympics. What kind of infrastructure was created in London 2012 and how might what’s left after the crowds go home affect the future of England? What should Rio do in 2016? For more on Rio, see, http://www.olympic.org/rio-2016-summer-olympics

International Rail Service: Is it an auspicious time for an international center for the study and development of transport that may hold environmental, commercial and even diplomatic potential? Should coastal universities like the University of Massachusetts Boston pioneer the transatlantic train?

Taniguchi, Mamoru. High-Speed Rail in Japan: A Review and Evaluation of the Shinkansen Train. Berkeley: University of California, Berkeley, Institute of Urban and Regional Development, 1992.

For a timeline of Japanese railway from 1872 to present, http://www.rtri.or/jp/.

For extensive books on train transit around the world especially Germany and Europe, see: http://www.robert-schwandl.de/

For the history of the Ecole des Ponts et Chaussees (School of Bridges and Roads) created in 1716, see: http://www.enpc.fr/english/enpc/history1.htm?sr=2&ur=1