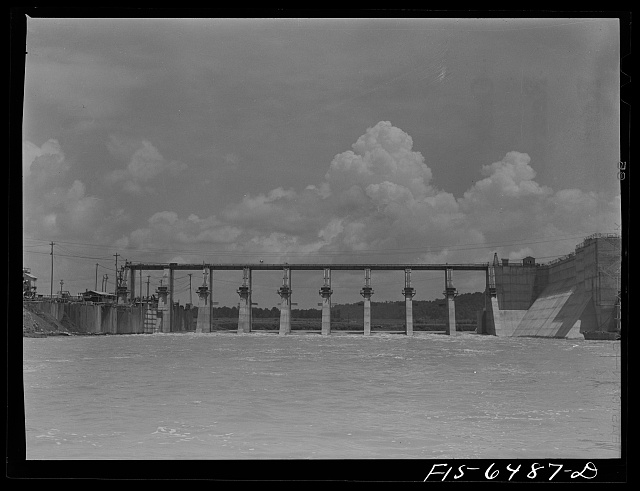 Fort Loudon dam under construction, from Library of Congress at loc.gov.

Water and electricity – Hoover Dam inspired a new era of bright lights that may have led to big cities such as Las Vegas. Soon to follow suit, the Tennessee Valley Authority (TVA) not only harnessed liquid to let there be light but also created a showcase of modern living in which all things electric were featured.

FIRST LOGO IN AMERICAN HISTORY FOR A PUBLIC PROJECT?

Was it Franklin Delano Roosevelt, whose nickname was FDR, inspired by the shortening of his name to a set of initials, who understood the power of a phrase? Although the project had roots earlier with the completion of Wilson Dam and two nitrate plants aimed at generating hydropower and manufacturing nitrates to be used in explosives, it was when President Roosevelt assumed office in 1933 and asked Congress to establish “a corporation clothed with the power of government but possessed of the flexibility and initiative of a private enterprise” that the Tennessee Valley Authority, or TVA, was born.

Soon began ambitious channeling of the Tenessee River basin, an area over 106,200 square kilometers (41,000 miles) reaching the states of Tennessee, Alabama, Georgia, Kentucky, Mississippi, North Carolina and Virginia. Big in scope, the TVA was equally grand in vision. Among its tenets were:

The TVA became known by a three-initial abbreviation (like FDR) but a logo communicated the real story: a fist grabbing a thunderbolt. The motto was: Power to the People with the tagline “Electricity for All.”

Both coasts of the United States were rather developed by the 1930s but not so central rural areas. Upton Sinclair wrote popular novels describing poverty in the Midwest; before his death, he had published more than 90 books. President Roosevelt came to office in 1933 with a new vision: to use the power of the federal government to relieve the unemployment from the Great Depression. Among the first programs FDR initiated was the CCC (Civilian Conservation Corps – another moniker abbreviated to three initials) offering jobs to unemployed young Americans to preserve forests, protect the soil, and fight natural hazards. Many CCC-ers worked in Department of Agriculture programs terracing land and fighting erosion. Vice President Henry A. Wallace was the advocate for such programs; he came from a family known for developing specialized agricultural crops. It was Wallace who recommended the idea of an “ever-normal granary” based on the Biblical tale. The TVA’s promise, “Power to the People: Electricity for All,” was in part reflective of the similar mission: energy power would be available with such abundance and reliability that even poor rural areas could afford it.

No discussion of the TVA and the implications for the future is complete without mentioning the town of Norris. Senator George W. Norris of Nebraska, oft called the “father of the TVA,” was an early supporter and may have influenced FDR. Norris Dam was dedicated in his honor, but the town of Norris might be his greatest lasting influence. Set in the Tennessee Hills 20 miles north of Knoxville, the town’s initial purpose was to house workers building Norris dam located four miles away on the Clinch River. But Norris was more than employee housing; it was a window to the world of what life could be like with abundant electricity. Norris featured state-of-the-art homes and businesses ranging from poultry farms, canneries and creameries all modernized with the hum of machines powered by electricity. Well-lighted public schools invited children and adults, the latter were offered specialized occupational classes such as farming with the introduction of electrical tools.

TVA management looked more like a corporation than a government agency. Section 2 of the authorizing act requires a three-person board. In an aim to emulate corporate process, the desire was to maintain a small leadership team that were professional managers “not engaged in any other business who may not have financial interest in any public-utility corporation engaged in the business of distributing and selling power to the public, nor in any corporation engaged in the manufacture, selling or distribution of fixed nitrogen or fertilizer.” Such non-compete clauses were important because the TVA was launched in competition with private power companies.

The three central rulers of the TVA were a kind of modern-day troika appointed by the President: Arthur Morgan, Harcourt Morgan (no relation), and David Lilienthal. The balance was a bit of a three-legged race; in 1938, Harcourt and David joined forces to oust Arthur who had been the first president. Harcourt led the board for 4 years, Lilienthal succeeding him. It was under Lilienthal’s leadership that the TVA reached its pinnacle as the largest source of electricity in the United States at that time. Lilienthal would later be appointed chairman of the Atomic Energy Commission.

The Hoover Dam gave us Lake Mead, and the TVA similarly created a recreation area developed by the National Park Service and the CCC (Civilian Conservation Corps). Before the flooding of the Norris Basin that would create the Norris Reservoir, an impoundment of the Clinch River, the Smithsonian Institution did an archeological survey and found more than a dozen prehistoric Native American sites with structures dating back to 1500 AD. 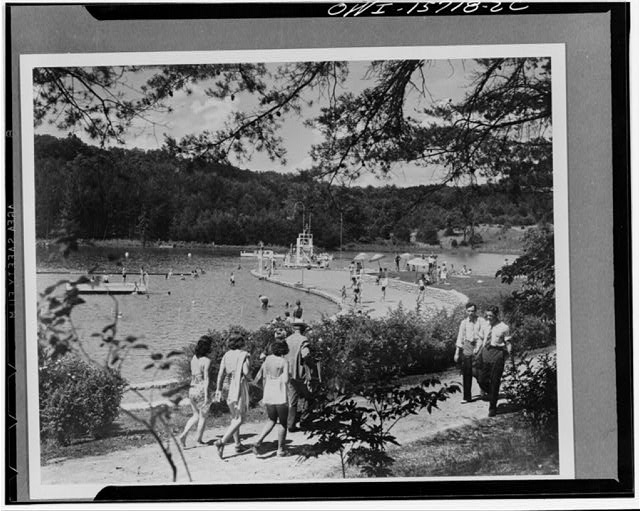 Big Ridge Lake, from Library of Congress at loc.gov.

Music now echoes across Big Ridge Lake on the third Friday of August during the annual Bluegrass Festival. Or, cut the second syllable for the blues festival honoring W.C. Handy held every July in Muscle Shoals, Alabama.

Be it enacted by the Senate and House of Representatives of the United States of America in Congress assembled, That for the purpose of maintaining and operating the properties now owned by the United States in the vicinity of Muscle Shoals, Alabama, in the interest of the national defense and for agricultural and industrial development, and to improve navigation in the Tennessee River and to control the destructive flow waters in the Tennessee River and the Mississippi River Basins, there is hereby created a body corporate by the name of the “Tennessee Valley Authority” (herinafter referred to as the “Corporation.”)

Public/Private + Defense/Development: TVA was at the same time a public project with a private structure, a defense initiative with economic development goals. Is there anything like it today?

Showcasing Innovation: Norris was a town electric. Kitchens had toasters to pop up bread for the family; would it be long until someone invented the poptart? How can new industries best showcase their transformative technologies? Did electricity become too popular as a result of the TVA? So much of our world is designed to plug in. Have we overused electricity? What’s next?

To see the TVA logo, a first grabbing a thunderbolt with the motto “Power to the People: Electricity for All,” see
http://newdeal.feri.org/tva/index.htm.

For general information on the TVA, see http://www.tva.gov.

For an article, about Oskar Hansen and Gordon Kauffmann who envisioned the Hoover Dam as the equivalent of the Pyramids, by Julian Rinehart, see
http://www.usbr.gov/lc/hooverdam/history/articles/rhinehart.html.

For more on the ancient Marib Dam,
http://www.yementimes.com/98/iss52/lastpage.htm.

For FDR and the TVA,
http://newdeal.feri.org

On Norris, the town:
http://tva.gov/heritage/norris.

For a complete collection of all files and notations from all reports and committee documents, see Morris Udall’s 1970-84 archives:
http://dizzy.library.arizona.edu/branches/spc.udall/findingaid/.

For a collection of references from magazines, newspapers, and press releases on the TVA, with pictures and maps, see
http://www.encyclopedia.com/html/section/TennVA_Bibliography.asp) Note: HighBeam Research, LLC. Copyright, 2004.

For a library of cartoons depicting the TVA, see:
http://newdeal.feri.org/toons/toon10.htm.