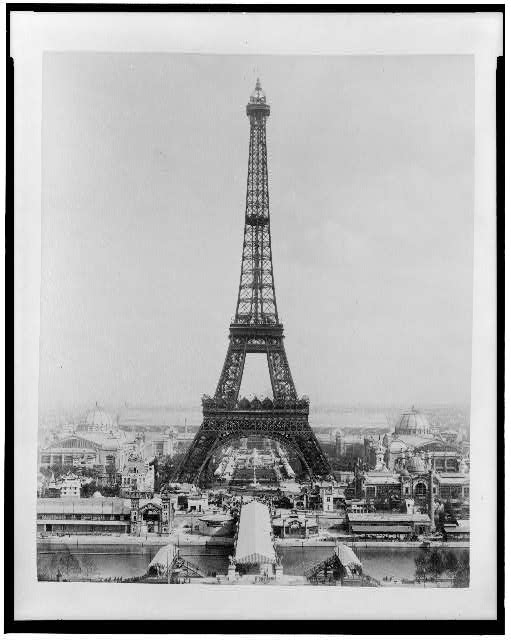 Eiffel Tower at the 1889 Exposition, from Library of Congress, at loc.gov.

Known for great art, France’s Eiffel Tower brings technical and aesthetic genius into form in one of the world’s most iconic monuments. It was France that coined the phrase les grands travaux (large-scale engineering works). Eiffel’s tower has become synonymous with Paris and has appeared in over 200 films.

We the writers, painters, sculptors, architects and lovers of the beauty of Paris, do protest with all our vigor and all our indignation, in the name of French taste and endangered French art and history, against the useless and monstrous Eiffel Tower. Thus read the protest signed by Guy de Maupassant, Alexander Dumas, Emile Zola, Charles Gounod, and Paul Verlaine among others. While some well-known Parisians voiced disapproval, the tower became an instant hit, fascinating the public and inspiring feats of bravado. In 1923, the man who would become mayor of the district of Montmartre bicycled down the tower using one of its legs as a sloping ramp. In 1954, a mountain climber scaled its height, and thirty years later two Englishmen parachuted from the top

Originally built for the International Exposition of 1889 to commemorate the centennial of the French Revolution, the tower was the unanimous choice of the committee who chose Eiffel’s proposal over more than 700 entries.

Eiffel, from Library of Congress at loc.gov.

It is a little known fact that Gustave Eiffel helped build the Statue of Liberty. In 1885, he collaborated with Frederic Bartholdi to create the wrought-iron pylon inside the statue. But Eiffel was already very well known in France when he proposed the tower.  He was revered for his work on the arched Gallery of Machines for the Paris Exposition of 1867, and the dome for the Nice Observatory. Eiffel wrote the book that was to change the landscape of many of the world’s great cities: The Resistance of the Air, published in 1913, reveals the mathematical formula to determine the exact curve of the tower’s base that could withstand the force of wind against it, and transform that force into added structural support. Many skyscrapers followed, using these formulae. As a result of Eiffel’s calculations, the tower sways only 4.5 inches at the top. An artist who is among the most famous in France, and the world, Gustave Eiffel also wrote a book entitled L’Architecture Métalique.

While standing at the top of his completed monument, Gustave Eiffel received the Legion of Honor, inducting him into that society that has been given special distinction and national renown in France. Generous in his collaborative approach, Eiffel inscribed the names of 72 of France’s greatest technical minds – 18 luminaries on each side of the base. Eiffel was later honored with his portrait on the 200-franc banknote (the currency of France before adoption of the euro in 2002); the reverse side of the bill depicted the tower.

The Eiffel Tower was perhaps the most meticulously planned project in history – all the planning done by Eiffel himself. In fact, the planning took longer than the building. There were more than 5,300 specification drawings, and 18,000 components made by 100 ironworkers offsite to be assembled by 130 workers on the scene. Constructed of iron and held together by 2.5 million rivets, the tower consisted of two platforms and a laboratory at 273 meters for Eiffel’s personal use. All the preparation was done in Eiffel’s factory outside of Paris in the town of Levallois-Perret. Planning was so detailed that individual elements were tooled to an accuracy of 1/10th of a millimeter.

But it was on-site that Eiffel’s organizational genius was revealed. The secret to success was team-based training. Teams of four workers were needed to install each rivet: one held the rivet in place, one heated it red-hot, a third made sure the head of the rivet was positioned exactly, the fourth hammered it in. According to Eiffel’s plan, the hot rivets cooled in place, expanding and strengthening the structure by taking advantage of thermodynamics.

Legend has it that a certain skyscraper in New York City once had a problem with an elevator. Repair engineers couldn’t fix it, the chief of the department tried but failed, and finally one afternoon Elisha Graves Otis himself walked into the lobby. He approached the errant elevator, fiddled with the call buttons for a moment as he pressed his ear to the door, and then stepped back several feet, rushed at the door and delivered one swift kick. Instantly the doors opened. The next day the building’s owner received a bill: $5,000.  When the outraged chief accountant called Mr. Otis to complain, stating the fee seemed rather high for two minutes’ work, Otis quipped: “That’s $1 for the kick and $4,999 to know where to kick it.”

Mr. Otis was also called to Paris.  Eiffel’s tower was always planned to allow the public inside the structure. The French company Roux, Combaluzier, and Lepape built the ascenseurs that carried passengers to the first platform by means of hydraulics, utilizing a double-looped chain for extra safety. In 1897, those elevators were replaced by equipment from the French firm Fives-Lille, but still the ascent was just to level one. 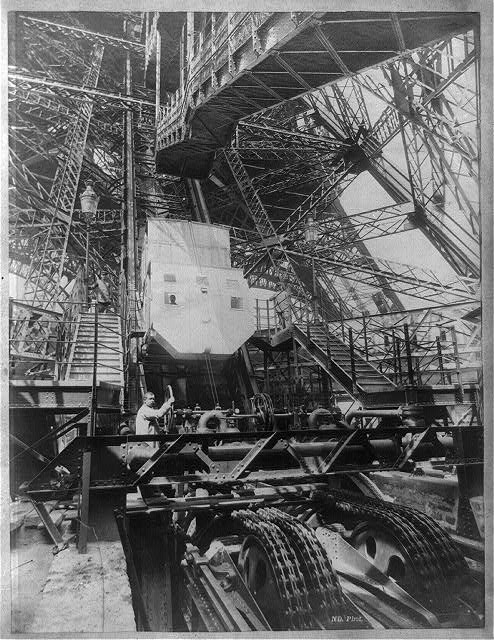 Otis’ elevator, from Library of Congress at loc.gov.

How could visitors get to the top of the 312.27 meters (1.024 feet) tall structure that was once the highest building in the world? This was a job worthy of Elisha Graves Otis who in 1853 had introduced the world’s first safety elevator in Yonkers, New York. From that moment in time, building moved above the limitations of stairs. Otis came to Paris and designed elevator cabins as two-decked rooms mounted on sloping runners, pulled by a cable powered by a hydraulic piston.

But the pièce de résistance was the vertical lift designed by Leon Edoux to bring visitors all the way up to the top. Passengers changed cars halfway up, because only one car could ascend, counterbalanced by the other going down, in a design reminiscent of an ancient water clock and similarly powered with water tanks providing hydraulic force. In the winter, the system of course was frozen so ascent was only seasonal but the method remained in place until 1983 when technology advanced to offer an alternative.

The Eiffel Tower’s height was also the source of its longevity. The original contract called for the monument to remain for twenty years and then be taken down. But Eiffel allowed, even sought, communication antennae to be added. When Eugène Ducretet sent the first radio signals, Gustave Eiffel approached the French military and suggested the tower be fitted with long-distance communications for radio transmission. By 1903, radio signaling had progressed and the military were using the tower to send messages around Paris. One year later, signals could reach to the French east coast. In 1906, a permanent radio station was installed in the Eiffel Tower and four years later, the monument became part of the International Time Service. In 1921, just two years before his passing, Gustave Eiffel proudly witnessed his tower beaming the first European public radio broadcast.

Eiffel provided special access to the tower for military purposes. One room on each floor was so designated, and the Minister of the General Commission was provided 300 free admissions per month. There was also allowance for the government to use the tower in times of war. Eiffel himself approached the military suggesting radio signaling equipment be installed atop the tower. But he was also careful to arrange compensation: time taken for military use required extension of the contract of concession by one year for every three months of use.

The Eiffel Tower is not just a monument to aerodynamics and aesthetics, it is a model of organization and management. Completed in just two years, two months and five days, the project finished ahead of schedule. Slated to open on May 6, 1889, the Eiffel Tower was ready on March 30 of that year. It was an instant financial success. Eiffel was an astute entrepreneur, and fixed fees accordingly. Construction costs were easily recouped by admissions receipts earned from visitors who flocked to the wonder.

The tower was to be taken down in 20 years; this temporary time-frame led to the lattice-design that was both strong but light and easy to disassemble. But between the tower’s usefulness as a radio signaling site and its popularity with the French people, Eiffel’s monument was never taken down. The tower continues to draw visitors: proposals of marriage, birthdays, and all manner of celebrations are memorialized atop the tower. By 2002, over 200 million people had made the pilgrimage to Paris’ iconic monument.

Below are excerpts from a translation of the agreement for the construction of the Eiffel Tower pertaining to the size, time-frame, and military use.

Mr. Eiffel promises to the Minister of Commerce and Industry, The Commissioner General of the Universal Exposition of 1889, to construct, in the role of entrepreneur, in the enclosure of the Exposition, in the Champs de Mars, a Tower made of iron of the height of 300 meters as part of the construction of the Exposition…this Tower will be completed and put into use by the opening of the Exposition of 1889…In order to facilitate scientific or military purposes and use, Mr. Eiffel will reserve on each floor a special room, which will remain free for the disposition of persons designated by the Minister of General Commission…in the case of war or the declaration of a state of siege, the State will have the clear right to take the place, actively or passively, of Mr. Eiffel for the use of the Tower.

Public Art: The Eiffel Tower was planned to be up for only twenty years. But a century later, it is more popular than ever. Does Saarinen’s Gateway Arch of St. Louis compare? How can cities around the world create public art that is both beautiful and profitable? During the United Nations Climate Conference in 2015, the Eiffel Tower served as inspiring signpost for the world’s better future.

Rights and Might: Should public structures be subject to military command? What powers must be in place for such use? For example, during the London 2012 Olympics, government sought to place security forces atop high-rise residential apartments near the Games. Eiffel wrote terms into the contract for compensation in the case of military use. Are there precedents that might be useful today?

For wide-ranging information on the Eiffel Tower, see http://www.tour-eiffel.fr/ This website offers detail on the construction process (including rivets and elevators), Eiffel’s advocacy of radio signal from the tower, and a comprehensive bibliography of books and other media.

For real-time webcam views of the Eiffel Tower, see http://www.abcparislive.com.

For a 3D model of the tower, see:
http://www.greatbuildings.com/buildings/Eiffel_Tower.html.