Boston is one of the oldest cities in the United States with some aspects not just antique but antiquated. In an effort to improve the environment, and traffic flow, mid-town, Boston launched what became known as the “Big Dig,” perhaps the largest and most complex road project in U.S. history. Placing a commuter highway called the Central Artery underground opened up space on the surface for a Greenway.

OPEN HEART SURGERY – WHILE THE PATIENT RUNS A MARATHON

Boston is the site of the famed marathon, so it was natural that the analogy for building a new highway running through the middle of the city while the current road remained in use was likened to performing open-heart surgery on a patient running the Boston Marathon. The project had assigned objectives: 1) replace the Central Artery, the major but obsolete elevated highway with an underground large-capacity modern road system; 2) complete the task with minimal disturbance to surrounding communities including the Italian-influenced North End and Chinatown, both popular tourist destinations known for cuisine; 3) devise new technologies for building and installing links under Boston Harbor to the city’s airport; 4) demolish and rebuild connectors to major highways exiting Boston to the west and south, and 5) accomplish all of the foregoing while this main artery through the city remained in constant use.

Boston’s historically tangled streets, many picturesque with cobblestones and narrow lanes, were laid out long before the advent of automobiles. Puckish residents suggest the original road mappers were meandering cows. It is still the case that on the Boston Common in the center of the city one finds ancient rings where people tethered their dairy cows; dogs are, by an animal life statute, allowed to play off leash in an about-turn. But by the 1950’s, the city grew dense with cars especially for traffic heading to the north shore beaches or south to Cape Cod. Commissioner of Public Works William Callahan authorized plans for an elevated expressway that split the downtown from the waterfront. Constructed to carry 75,000 vehicles per day, the road was travelled by over 200,000 in just a couple of decades after it was built. Safety suffered; the road had an accident rate more than four times higher than average urban interstates.

Fred Salvucci, from Massachusetts Institute of Technology at mit.edu.

“I promised my grandmother when I became a politician,” confessed one friend to another over lunch at a Boston wursthaus, “that I’d never allow a family to be displaced again as a result of a political decision.” The speaker was Fred Salvucci, state secretary of transportation. The topic of the luncheon conversation was what to do about the old Central Artery that had torn through the Salvucci homestead, along with the apartments and houses of 20,000 city residents. Sometimes great ideas come from luncheon conversation; the Channel Tunnel was first conceived over lunch at Luchow’s in New York City. In Boston, Salvucci’s lunchmate was William Reynolds who responded, “What if we just put the road underground, you know, depressed it below the current road?” For years, the phrase “depressed artery” floated around the halls of the State House. When Salvucci was succeeded in his job by Alan A. Altshuler, the project took on new momentum. U.S. Senator Edward M. Kennedy, Congressman Thomas “Tip” O’Neill, Jr., and Congressman Joseph Moakley promoted the idea in Washington. It was Moakley who quipped that his favorite bird was the crane – the construction crane – because of all the new jobs the project would bring to his district. Soon, that prediction would come true. 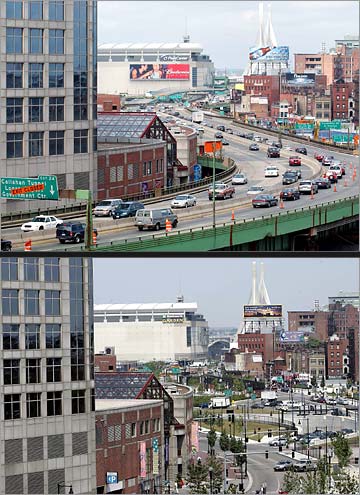 Before and after of the “Big Dig,” from The New York Times at nytimes.com.

The primary requirement of the job was to construct the project while tens of thousand of commuters used the artery and its integrated connectors and off-ramps every day. According to Alex Kreiger of Harvard University’s Department of Urban Planning and Design, one-third of the cost of the project was spent just to keep the city functioning while the work progressed. There was also time devoted to planning and environmental assessment. While the project officially began in 1982, and environmental impact studies commenced in 1983, it was not until the Surface Transportation and Uniform Relocation Assistance Act of 1987 was passed that federal funds became available. Environmental studies continued until 1991 when the Massachusetts secretary of environmental affairs issued a certificate approving the project’s final supplemental environmental-impact statement, a 5,000 page document in 12 volumes weighing 44 pounds (20 kilograms). But there were many concerns still to be addressed including release of toxins by excavation, danger of disrupting the nest of millions of urban rats that might begin to roam the city in search of new housing. By the time federal environmental clearance was obtained, the process had taken seven years, each annual revision increasing the original cost estimates. A similar escalation in costs happened in the planning and construction of the Channel Tunnel whose cost exploded from the 1959 estimate of US $100 million to $15billion upon completion in 1994, even though the same original design was built. So too it was with the Central Artery: the original estimate was just one-third of what turned out to be the actual cost. But the project transformed the city. The legendary MTA upgraded its stations at the same time, giving rise to the Charlie Card. Improvements popped up all over town including the campus of UMass Boston. The architectural jewel of the project may be the Leonard P. Zakim Bunker Hill Bridge that opened in 2002 to rave reviews of its soaring beauty and clever integration of anchor towers reminiscent of its nearby namesake, the Bunker Hill Monument. Created by Swiss architect Christian Menn, the bridge was placed at the northern terminus, connecting the underground highway with I-93 and U.S. 1 in a plan that fit with U.S. Federal Highway System integration. It was the widest bridge of its type ever built and the first to use asymmetrical design. At night the entire structure glows in soft blue light.  The Rose Fitzgerald Kennedy Greenway, the final piece of the project. added 150 acres (60 hectares) of urban green space, parks, and walkways. What was once a river of concrete and exhaust fumes was now transformed into gardens with public art that complete Frederick Law Olmstead’s “Emerald Necklace” of parks that ring the city.

Two New York matrons, depicted in a New Yorker cartoon, chatted on the train from Manhattan to Boston as they prepared for lunch at a Back Bay club. “Darling,” said one to her companion, “Before we arrive I must warn you they’ve taken down Boston and put up something else.” Boston has a history of re-inventing itself, down to the very land on which it rises. One might consider the plan of the city of Boston by Richard Williams, drawn in 1775, showing the urban port (the Williams depiction is now archived at Oxford University’s Bodleian Library). Originally just 478 acres of land, virtually surrounded by water and marshes, Boston had to find ways to grow as settlers arrived at one of the first entry ports of the nation. A magnet for commerce, Boston soon became a center of education and political organization as well. Much of the city today evolved through land reclamation, backfilling the marshlands and reclaiming land from the ocean. Looking at a list of Boston landfill projects is like reviewing a history of Boston’s construction technology:

-Source: Dalia and Stevenson with permission of the authors:
http://site.www.umb.edu/conne/wendy/#1.
See also Building the World, p. 819.

The Central Artery/Third Harbor Tunnel project (CA/THT) is far and away the largest and most expensive public works project ever undertaken by the Commonwealth of Massachusetts. It will have extraordinary and long-lasting impacts of the cities of Boston and Cambridge, the metropolitan area, eastern Massachusetts, and indeed millions of Americans travelling in the northeast corridor. The Project also has extraordinary potential to improve air quality, improve our ability to commute in and out of and through the city (whether by car, train, bus, or rapid transit), improve recreational opportunities in Cambridge, Boston, and the Harbor, and improve the visual character of downtown Boston and the banks of the Charles River. The project, and the environmental benefits it affords, provides a unique opportunity to make substantial improvements in the quality of life for the citizens of the Boston metropolitan area. This opportunity must not be missed.

Depressing for Success: Placing highways underground allows the “tunnel” effect to reduce wind drag for more vehicle fuel efficiency. Another environmental benefit is the opportunity to capture and treat emissions before they enter open air. With highways (or train routes) below ground, new possibilities surface. How does Boston’s Greenway complete the vision of a city that breathes? Does Chicago’s Millennium Park reveal the rail-yard underneath? Can cities redistribute transportation and recreation? And what should happen to neighborhoods disturbed, like Boston’s West End or Scollay Square?

New Land: Boston is a “serial city” built on landfill over time as needs developed. Can the creative use of land, and a free-thinking approach to roads and parks that resulted in the Central Artery and Greenway, inspire other areas of the world where more land is needed? Might conflict in the Middle East be eased by developing new land? Can island nations threatened by ocean rising waters due to climate change consider creating new land in ways pioneered by the Netherlands and exemplified by Boston?

Dalia, Wendy and Robert Stevenson. “Boston and Its Environs,” part of “Conservation New England: Past Present & Future,” a website created by students of Conservation Biology of New England, a graduate course in the Biology Department of the University of Massachusetts, Boston, see:
http://site.www.umb.edu/conne/wendy/Boston.html.

Tobin, James. Great Projects: The Epic Story of the Building of America, from the Taming of the Mississippi to the Invention of the Internet. New York: Free Press, 2001.

For a history of Boston landfills, see Jeffery Howe’s “A Digital Archive of American Architecture: A Study Guide for FA 267 – from Saltbox to Skyscraper: Architecture in Boston,” which includes a moving map where the reader can see the land of Boston being filled in serially. See:
http://www.bc.edu/bc_org/avp/cas/fnart/fa267/bost_fill.html.