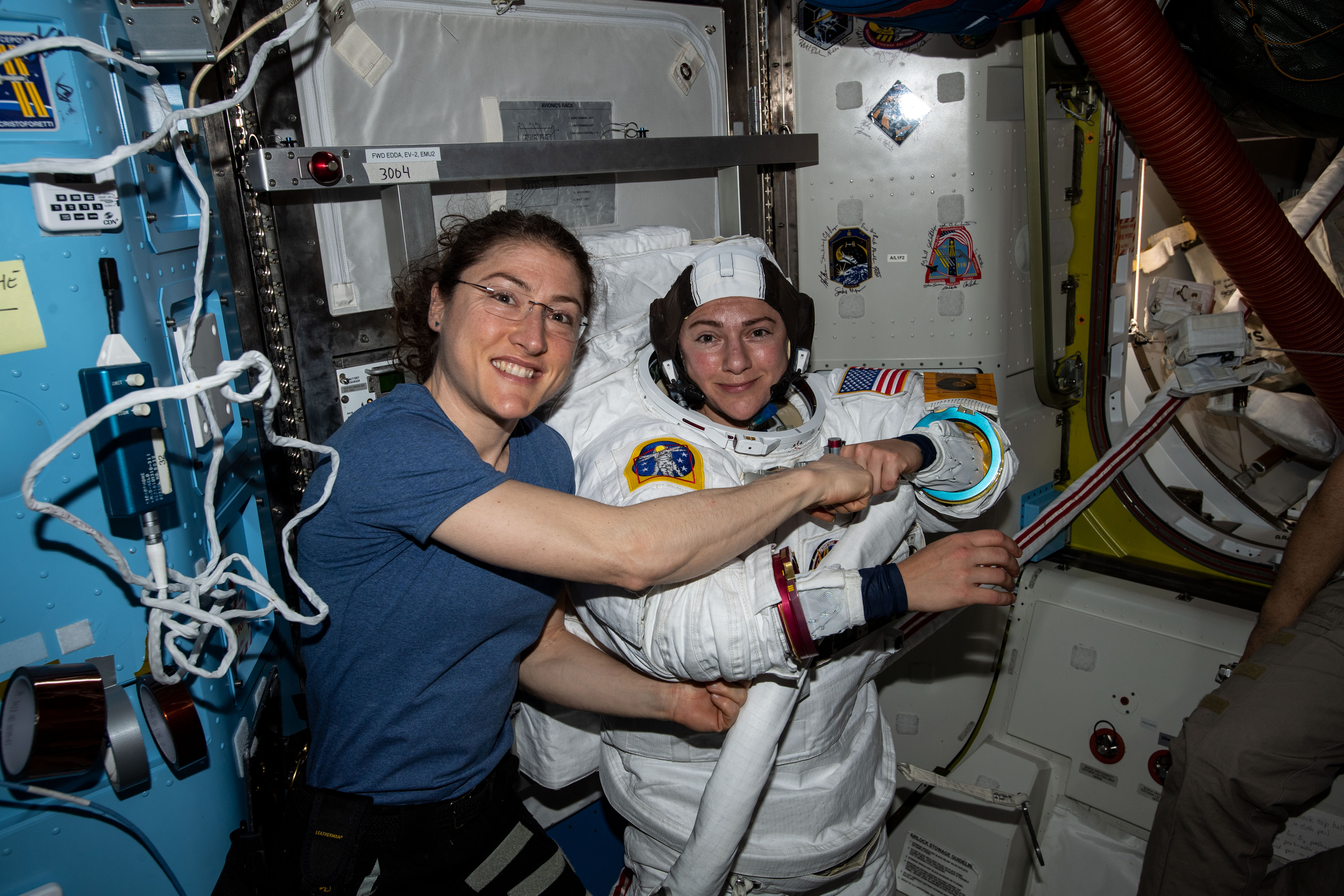 Working together outside the International Space Station, Christina Koch and Jessica Meir made history on October 18, 2019 in the first all-female spacewalk. As they switched to extravehicular mobility units (spacesuits or EMUs),one noted the suit had a part with the exact same serial number as the gear famously worn 35 years ago by the first American woman, Kathryn Sullivan, on October 11, 1984. The very first woman to walk in space, on July 25, 1984, was Svetlana Savitskaya. Other women spacewalkers include: Kathryn Thornton, Linda Godwin, Tammy Jernigan, Susan Helms, Peggy Whitson, Heide Stefanyshyn-Piper, Sunita William, Nicole Stott, Tracy Caldwell Dyson, Kate Rubins, and Ann McClain. (Pearlman 2019) The first American woman in space was Sally Ride: there is a spot on the moon named after this pioneer.

The year 2019 saw another space milestone, celebrating the 50th anniversary of the first human step onto the moon as a pinnacle achievement of the NASA Apollo Program. According to present-day NASA, “We could very well see the first person on Mars be a woman. I think that could very well be a milestone,” commented NASA Administrator Jim Bridenstine. (Weitering 2019)

In 2016, NASA created the Lesbian, Gay, Bisexual, Transgender, and Queer Special Emphasis Program to foster an inclusive environment. Astronaut Sally Ride, and the first American woman to go into space in 1983, might be an inspiration. Sam Long, science teacher at Standley Lake High School, Westminster, Colorado, has entered the “Out Astronaut” campaign competition; the winner will receive training in the Advanced PoSSUM Academy at Embry-Riddle Aeronautical University. (Goodland 2019) PoSSUM – Polar Suborbital Science in the Upper Mesosphere – is the only crewed suborbital research program; citizen scientists will study noctilucent (night-shining) clouds in space, especially observing ties to climate change.

Meanwhile, Koch and Meir, upon the historic successful completion their spacewalk achievement will offer a news conference from orbit.  Tune in on Monday 21 October 2019 at noon EDT for their live news conference.

Out Astronaut: Empowering the LGBTQ Community in Science and Space. “Out Astronaut Contest.” https://outastronaut.org/contest/