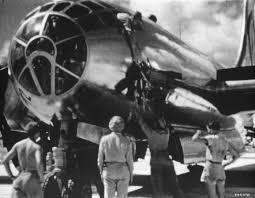 The Enola Gay, from the Los Alamos National Laboratories at lanl.gov.

On September 21, 2012 the B-29 bomber has its 70th birthday. One of the most famous of these planes, the Enola Gay, which dropped the atomic bomb on Hiroshima and Nagasaki, became part of the military in 1945 when it was accepted by the United States Army Air Forces (USAAF). While the debate still rages as to whether the use of the atomic bombs in the Pacific theater at the end of World War II was the right choice, it is clear that the Enola Gay is an important piece of American history. Starting in 1984 it has undergone bouts of restoration and exhibition, including a rather controversial show in 1995 at the Smithsonian. It now permanently resides in the National Air and Space Museum’s Steven F. Udvar-Hazy Center in Chantilly, VA. For more information of the Enola Gay and the development of the B-29 Superfortress see:
http://airandspace.si.edu/collections/artifact.cfm?id=A19500100000