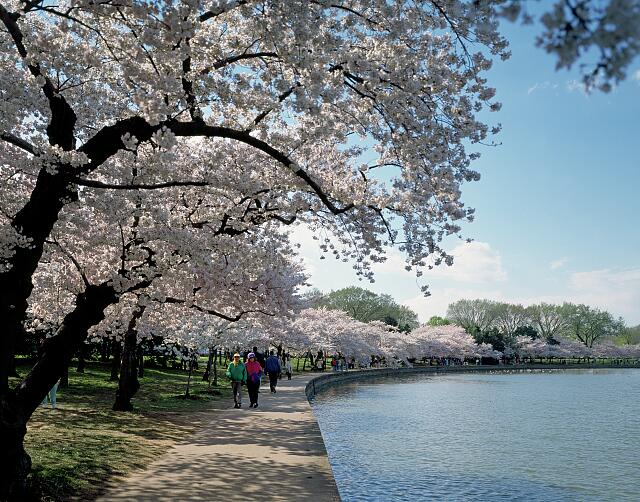 Cherry Blossoms at the Washington, D.C. Tidal Basin, from Library of Congress at loc.gov.

Springtime is official, in Japan and the United States, when cherry trees blossom. Long a tradition in Japan, flowering cherry trees, or Sakura, are celebrated as a national treasure symbolizing life’s evanescent beauty. In 1912, on Valentine’s Day, February 14, Japan bestowed upon the United States a gift of 3,020 cherry trees to be planted in the capital of Washington, D.C. During the next seven years, 1,800 Somei-Yoshino trees were set around the Tidal Basin, while the very special Gyo-i-ko variety were reserved for the gardens of the White House. Later, in 1952, the United States was able to return the favor when a particularly beloved Tokyo cherry grove needed restoration. The National Park Service sent cuttings from the original gifted Japanese trees so that Japan’s capital could reestablish the Arakawa River garden. Statuary soon joined the other monuments for which the United States capital is famous: on April 18, 1958, a Japanese Pagoda was presented as a gift by the Mayor of Yokohama to “symbolize the spirit of friendship between Japan and the United States of America as manifested in the Treaty of Peace, Amity and Commerce signed at Yokohama on March 31, 1854” (www.nps.gov/cherry/cherry-blossom-history.htm). Each spring, in the United States and in Japan, diplomacy is renewed.