Music as a Tool of Conflict Transformation? 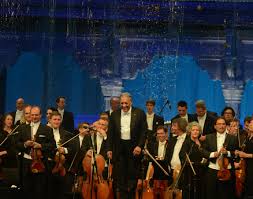 “I have waited and dreamt of this moment for years…We only want to do good. Music must go out from here to all our friends everywhere… To all Kashmiris,” said world renowned conductor, Zubin Mehta on 7 September 2013 while leading the orchestra in the famed Mughal Garden in the heart of Srinagar, the summer capital of Jammu and Kashmir on the Indian side.

The concert, organized by the German embassy in New Delhi, was perhaps the first of its kind in the troubled Kashmir, in which the famous Bavarian State Orchestra of Germany played Beethoven, Haydn and Tchaikovsky. The orchestra also played Kashmiri music in conjunction with a Kashmiri ensemble, led by Abhay Sopori. The concert titled Ehsaas-e-Kashmir (the feel of Kashmir) can be watched  here.

Expectedly, the music program received opposition from separatist leaders, who called for protests against it. Some opposition groups organized a parallel concert titled Haqeeqat-e-Kashmir (the reality of Kashmir) in the city. The good thing that can be observed is that the protests took the shape of another music concert, not violent demonstrations and bloodshed.

Can music be an instrument of conflict transformation? Putting it in another way, can music like other forms of art such as dance and drama, literary fests, etc. play an effective role in changing the mind of leaders and their followers who seek resolution of conflicts through violent methods? Particularly in the case of Kashmir, which has a rich Sufi culture and various  musical traditions, how far can such an occasion can be  a catalyst in moderating the violent positions of the parties?

Before the start of the program, German Ambassador John Steiner  told the audience that the concert is a tribute to the people of Kashmir and their culture. In his words, “The distance between Munich and Srinagar is 7,756-km. Today, the distance reduces to zero. German and European cultural heritage bow to Kashmir, to its history, to its beauty and to its difficult reality and journey.”

Such a program also took place in 1955 when the Soviet leaders Khrushchev and Bulganin visited the valley.   However, in the 1990s the separatism took a violent turn with support from across the border and also with repressive measures by the Indian security forces. The violence led a whole generation of Kashmiris, who were born and brought up in those years, to question the very status of Kashmir and turn towards violence under the guidance of radical leaders.

But one can notice that even the separatist leaders  were divided on this concert. Some of them questioned the very organization of the program by Germany in a disputed territory and called the move a ploy to showcase that everything is normal in Kashmir. While some others described the expensive event as a waste of resources which could be diverted for poverty eradication or development purposes. The Nawaz Sharif government of Pakistan, a party to the conflict, remained muted concerning the concert. This indicated the moderate approach of the newly elected government to the conflict, and its interest in cultivating friendly relations with India.

Music, which  is not essentially religious, has often been a victim of radicalism in Kashmir. Radical groups in Kashmir like Lashkar-e-Toiba, Dukhteren-e-Millat, Jaish-e-Mohammad, etc. perceive music as antithetical to religion. Besides music, they perceive freedom of expression and gender equality in the same way. In that sense, they share same values and ideas with other radical groups like the Taliban in Afghanistan and Pakistan. Pragaash, an all-girl rock band in Kashmir, which was getting popular in the region due to its avant-garde music, had to vanish within months of its emergence due to threats from these radical groups.  In contrast, another girl of Kashmir origin in Pakistani city of Karachi, Maha Ali Kazmi has become popular due to her romantic song Nazar, which can be watched here.

Any observer with having a sense of reality of the Kashmir conflict, and an understanding of the reality of national, regional and global politics in the post-cold war globalized world will be comfortable in arguing that neither the rigid positions of  India  and Pakistan, nor the separatists are going to be realized.  The official Indian position that undivided Kashmir is an integral part of India, and Pakistan’s official position of supporting Kashmir’s right to self-determination (with the hope that it will merge with Pakistan), are  matters of the past. This was realized  in the early 2000s when both  countries decided to make the border flexible, allow people- to- people contacts and commence cross-border trade. I have argued in my monograph ‘ Making Kashmir Borderless‘  that a borderless Kashmir with free flow of goods, ideas and people across the border (while retaining the symbolic division to satisfy national egos) will perhaps be the most feasible solution to the protracted conflict.

The South Asian subcontinent, which includes India, Pakistan and the undivided Kashmir, shared a common history and many aspects of culture. This is no truer than in case of music and drama. Noted Bollywood actors like Balraj Sahni, Dev Ananad, Dilip Kumar, Sunil Dutt, Kapoors and a host of others hailed from Pakistan, while noted Pakistani singers like Mehdi Hassan, Munni Begum, Reshma and many others hailed from India. The history of cross-cultural linkages is indeed legendary. The famous Sikh shrine Nankana, the birth place of Sikh religion founder Nanak, lies in Pakistan, while the famous Sufi shrine in the name of Chisti, frequented by Pakistani Muslims, lies in India. As a friend from Pakistan told me, it is the vested interests that create most of the problems. Common people, busy in the daily routines of life, want to live in peace and enjoy themselves. The concert early this month sends this message. More such events should be organized in both parts of Kashmir with support from New Delhi and Islamabad.

Debidatta Aurobinda Mahapatra is a PhD candidate in the Global Governance and Human Security Program at UMass Boston. He is also a fellow at the Center for Peace, Development and Democracy in the same university.