The Panama Canal from Hofstra University at hofstra.edu.

The Panama Canal saved 7,872 miles in transit for cargo, and people, when it opened to applause from shippers around the world. No longer was it necessary to sail around South America. Difficult to build, the Panama Canal’s story is a drama involving changes in leadership, tragedies and victories in public health, and perhaps one of the greatest achievements in public relations. The Panama Canal caused a new era in shipbuilding. The new and improved version, technically known as the Third Set of Locks Project ,doubles capacity with new locks on both the Atlantic and Pacific sides, as well as raising Lake Gatun. The reason for the expansion? Accommodation of “Post-Panamax” megaships carrying ever-bigger loads of cargo and ever-more decks of tourists for transit of one of the world’s most famous cruise itineraries. Expansion of the Panama Canal caused ports to enlarge their capacity: Baltimore, Norfolk, and Miami are among United States ports accommodating post-panamax ships in a post-2015 world. Where will the world’s next cut-through be? Cuba? Or will Ernst Frankel’s design for the Bering Strait, delivered in the Annual Frank P. Davidson Lecture in Paris, 2012, be next short-cut to transform world transport? 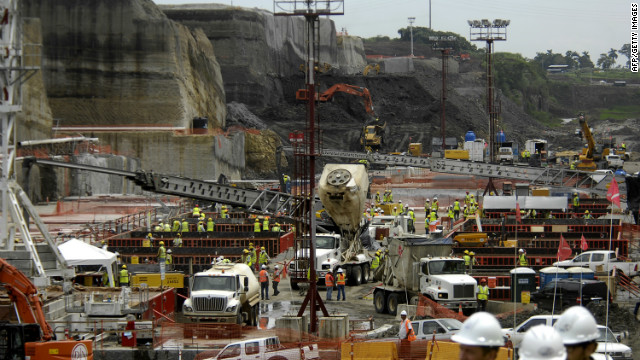 Workers on the new Panama Canal locks, from cnn.com.

In a recent article in the New York Times, the plans for the future of American ports is credited, perhaps, to the success of the Panama Canal. With more and larger ships slated to be passing through the canal by 2015, some American ports are preparing to accept larger shipments in hopes that their million dollar investments will produce much larger returns.

For more on the developments in Panama and U.S. ports, please see:  http://www.nytimes.com/2012/08/21/us/us-ports-seek-to-lure-big-ships-after-panama-canal-expands.html?pagewanted=all