Today is Earth Day. California’s drought is severe, and so is social criticism. Using the power of Twitter and other social media, vigilant citizens report water misuse and abuse. Ancient Rome was no different: Juvenal satirized water thieves, including the wealthy who bribed plumbers to pipe personal waterlines to their thirsty homes. Public relations campaigns helped England promote the New River, bringing water to London. Will “drought shaming” help to solve the water crisis? This week marks the dedication and opening of the Edward M. Kennedy Institute for the United States Senate, on the campus of the University of Massachusetts Boston. Ancient Rome’s Senate was created just after the founding of the City of Rome; the advisory body endured in power through many changes in the realm. Chosen from among leaders of the people, senators guided governance, issuing an opinion called a “senatus consultum.” Some might observe that while administrations may change, consultative representation might be the mind, and heart, of civilization.

Earth may be a water planet, but this vital resource is not evenly distributed. Over 1.2 billion people face water scarcity; another 1.6 billion live in areas with enough water but not enough infrastructure to carry supplies from aquifers, rivers, and lakes. More alarming is the rate of change: water use has doubled in just the last century. When ancient Rome suffered water scarcity, the aqueducts were built. England solved a water problem with the New River. Upon the 2015 culmination of the United Nations’ “Water for Life” decade, what innovations should our world pursue? Ancient Rome had more water per person than most of today’s cities. And there was enough for fountains, celebrated in Ottorino Respighi’s “Fontane di Roma.” Water is a limit to growth: Tiber threatened, Rome sent expeditions to the hills to find new sources, and built aqueducts to bring water to the city. Waters had brands: one spring was named “Aqua Virgo” after a little girl, with a particularly clear complexion (this was thought to be an indication of abundant clean water), who guided experts to a hidden spring. There is still a cafe, near the Vatican, where cappuccino is made with this special exilir. Water is recognized as a critical need for the world’s future. Actor Matt Damon‘s vision, and film “Running the Sahara,” may see Africa lead.

Hoover Dam is not only an achievement of hydroelectric engineering but a work of art. After the dam was designed from an engineering standpoint, architect Gordon B. Kaufmann joined the project to rework the design to add an artistic dimension: a pattern of plain surfaces relieved by carefully placed shadows. In addition, Oskar W. Hansen was commissioned to create two large cast concrete panels depicting flood control, irrigation, power, and the history of the area. It was Hansen who set, in the dam’s floor, a star map comparing the Hoover Dam to the pyramids. Water is central to earth and civilization; the Romans built aqueducts – and fountains. Now, how might water’s future be honored, and perhaps protected, by art?

Ancient Rome had more fresh water available to its people than present-day New York: about 200 gallons (750 liters) per person per day, compared to average per capita consumption in the United States of 150 gallons (563 liters). Rome’s fountains, over 1000 gracing the city, were evidence of abundance of aqua vitae, water of life overflowing. Originally dependent upon the Tiber River for all things aquatic, from drinking to sanitation, Rome quickly encountered limits to growth. Answers lay beneath the ground in the form of springs, channeled by the famed Roman Aqueducts built by a peacetime Roman army. Without abundant water, ancient Rome could not have grown to its population of over one million. The same is true for cities today: water is a limiting factor, made more precious by demands upon its availability for industry, agriculture, and of course drinking. By 2025, half of the world’s people will suffer water deprivation. What can, and should, we do about the destiny of water? 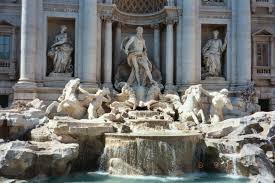 Located at the endpoint of what was originally the Aqua Virgo (part of the Roman aqueduct system), the Trevi Fountain’s construction began in 1629, when Pope Urban VIII asked Bernini to design a revamp of the existing fountain, which the Pope saw as too dull. Bernini was not the final designer, although his touch is clearly visible in the Baroque fountain. Construction was revived in 1732 by Pope Clement XII, with Salvi as the artist. Legend has it that if you turn you back to the fountain and toss a coin in, you’re destined to return to Rome.

Entrance to baths, from romanbaths.co.uk.

Rome was a city whose culture revolved around water, and was enabled by the aqueducts leading to the city. This love of water went beyond the heart of the empire, however, to the outer reaches of the Caesar’s rule. England was one of the farthest outposts of the Roman Empire, but the culture of Rome made quite a mark on the land just the same. A visitor to England today is likely to take a trip to the city of Bath, named after, well, the baths located there. The baths at Bath were built around Britain’s only hot springs and were a social hot spot in the Roman period. Today the ruins stand fairly well-kept, and if you dare you may have a drink of the spring’s water, which supposedly has healing properties. To learn more please visit the official website of the baths at http://www.romanbaths.co.uk/default.aspx