Boston’s Emerald Necklace, Chicago’s Jackson Park, the U.S. Capitol Grounds in Washington, D.C., and New York’s Central Park: these were some of the public parks and landscapes that Frederick Law Olmsted (born 200 years ago this week) created. One of Olmsted’s seven principles of a successful public landscape was sanitation: below the surface and woven into the soil are drainage and engineering innovations that serve to enhance health and well-being of the environment, and those who visit it for refreshment and renewal. Olmsted believed public parks could give a city ‘lungs,’ and those who visited a place to breathe. In fact, this year’s bicentennial events include “Lungs of the City: Olmsted’s Parks in Music” with the American Wild Ensemble performing works inspired by outdoor spaces and parks. Before practicing landscape architecture full-time, Olmsted had been director of the U.S. Sanitary Commission, an organization that later became the Red Cross. Public health was a life-long passion for Olmsted, along with a belief that clean air, plants, and a beneficial environment were essential to human, and natural, health. 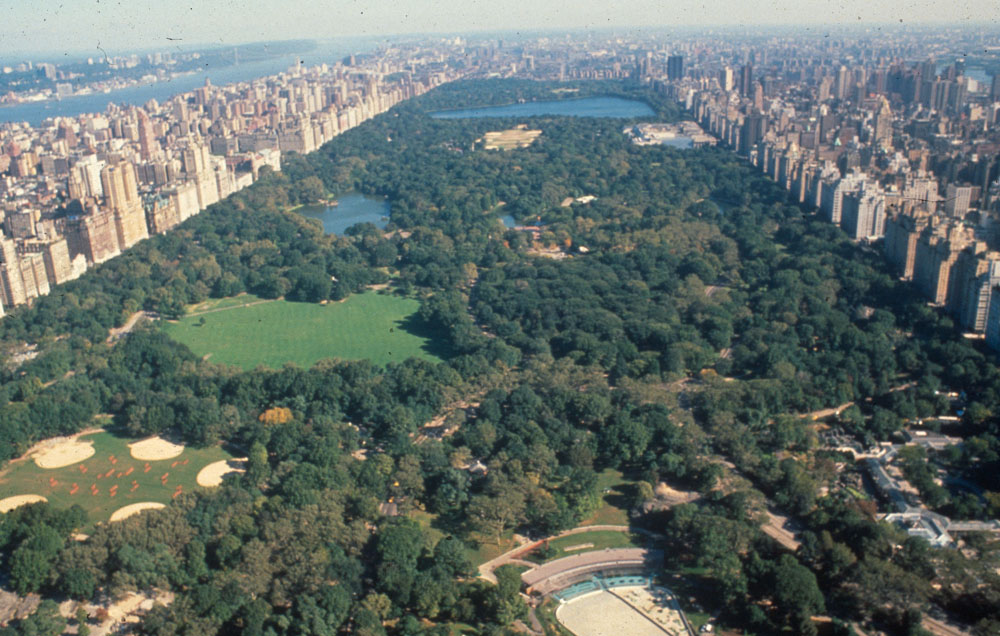 Olmsted’s vision of a city’s need for green space developed at a time when urban areas were becoming unhealthily crowded. Central Park, in New York City, result of a design competition won by Frederick Law Olmsted and Calvert Vaux, was the first landscaped public park in the United States. For its time, it was a macro project: 20,000 workers carved a new landscape enhancing existing terrain (and sadly relocating some groups dwelling there). Over 270,000 shrubs and trees were planted, along with sculpting of a new reservoir from what had formerly been a swamp. Built in 1858, a time before air-conditioning, Central Park provided urban denizens with a literal breath of fresh air. Olmsted stressed the value of “the feeling of relief experienced by those entering them, on escaping from the cramped, confined and controlling circumstances of the streets of the town. In other word, a sense of enlarged freedom is to all, at all times, the most certain and the most valuable gratification afforded by a park.”(Wilson 2020).

Similarly, the Appalachian Trail, suggested by architect Benton MacKaye in a 1921 article in the Journal of the American Institute of Architects, for the purpose of preserving original land, in the form of a protected trail of great length (it can take five-to-seven months to hike the whole Appalachian Trail), so that people could experience true wilderness. The earlier 1911 Weeks Act granted the United States government authority to buy private land to establish national forests (Hanson 2022). Later, the Wilderness Act encouraged acquisition of land in original nature: since its founding, mover than 100 million acres have been so dedicated. MacKaye suggested, in the seminal article, “new approach to the problem of living.” (MacKaye 1921) 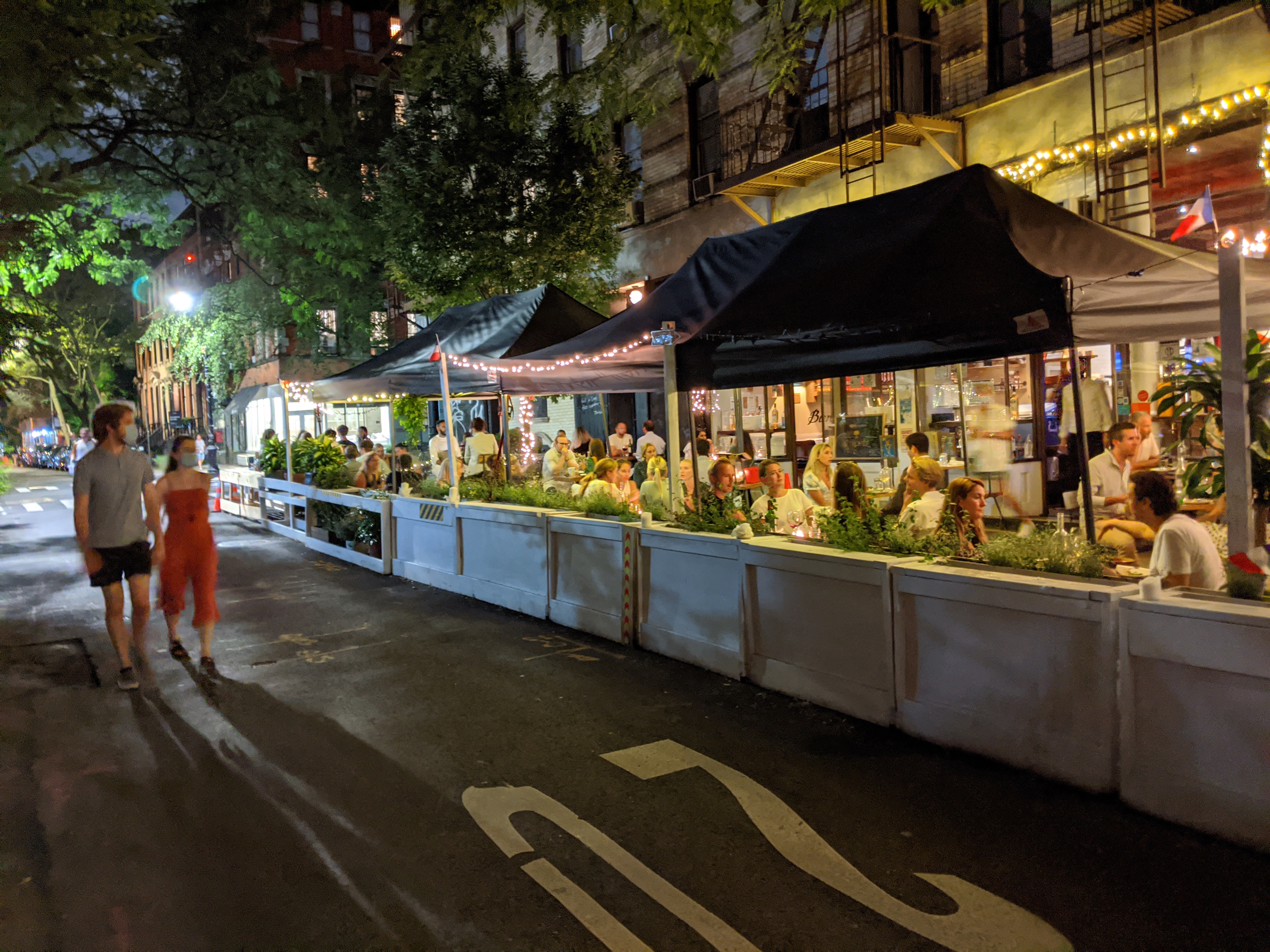 The importance of outdoor space was re-experienced during the recent pandemic. Families held outdoor reunions; restaurants opened up sidewalk cafes, parks welcomed those who needed a break from home isolation. Central Park, 153 years after its opening, proved Olmsted right.

Buenos Aires, world megacity with a population of 16 million (megacities are 10 million+): the name of the city means “Good Airs.” This photo features the Puerto Madero section of Buenos Aires. Image: “High-Rises of Puerto Madero” by Deensel 2018. Creative Commons 2.0, wikimedia. With appreciation.

Cities are home to over half of the world’s population; by 2050, that percentage will grow to 68%. As cities grow, so can parks. Olmsted’s Emerald Necklace, a circle of parks surrounding Boston, gained a new jewel when the Central Artery Project rebuilt the highway underground and replaced surface land with the Greenway, including a carousel.

Ride a carousel in the middle of the city – Boston’s latest jewel in Olmsted’s Emerald Necklace. “Greenway Carousel, Rose Kennedy Greenway,” by Daderot 2014. Dedicated to the public domain (CC0) by the photographer. With appreciation.

To participate in one of the many events celebrating the 200th birthday of Frederick Law Olmsted, click here.

Henson, Alex. “The Founder of the Appalachian Trail Imagined Something Even Grander: Utopian vision of a Harvard forestry grad.” November/December 2014, Volume 35, Number 6.  Humanities Magazine, National Endowment for the Humanities. https://www.neh.gov/humanities/2014/novemberdecember/statement/the-founder-the-appalachian-trail-imagined-something-even

MacKaye, Benton. “An Appalachian Trail: A Project in Regional Planning,” 9 October 1921, pages 325-30, Journal of the American Institute of Architects.

Wilson, Michael. ” ‘It Sort of Gives You Hope,’ One Place New Yorkers Go to Escape Their Homes. New Yorkers have headed outdoors to the parks to enjoy sunshine and nature – as long as they are 6 feet away from each other.” 19 March 2020. New York Times. https://www.nytimes.com/2020/03/19/nyregion/nyc-parks-coronavirus.html?referringSource-articleShare