Energy goals to stop climate change are clear: we must transition from fossil fuels. Chief among the priorities is coal. Transitioning from coal threatens jobs: as coal declines in use, some areas formerly active in coal mining suffer 30% unemployment. Past efforts to offer new jobs in American coal-mining towns included $7 million to open an optometry school in Pikeville, Kentucky, where miners could train and practice a new profession. As the only college of optometry in Kentucky, UPIKE offers opportunity. Another option is work reclaiming abandoned mines to prevent mudslides and collapse, threats increasing in stronger weather due to climate change. Before the Surface Mining Control and Reclamation Act of 1977 (SMCRA), mining businesses were not required to clean up or reclaim sites.  Since then, 46,000 open mine portals have been reclaimed with water supplies restored and renewed. But mines left open prior to the law remain a threat, and $11 billion is required to reclaim the sites.

Transitioning from coal jobs will be an important goal. “Coal mining.” Illustration from The Graphic, 1871. Image: wikimedia public domain.

Rebuilding coal sites with renewable energy projects seems like a natural option. Coal mines are already abandoned, but not suitable for housing developments or office buildings. There are 130,000 former coal mines available for development. What about solar plants? That’s the idea of Edelen Renewables, now building a solar facility where 300 workers will install solar panels on 1,200 acres at a pay rate of $25-30 per hour. Miners usually make about $30 per hour. Workers will also earn a certificate. Solar is the fastest-growing source of renewable electricity in the United States, and tax-credits are only increasing growth. 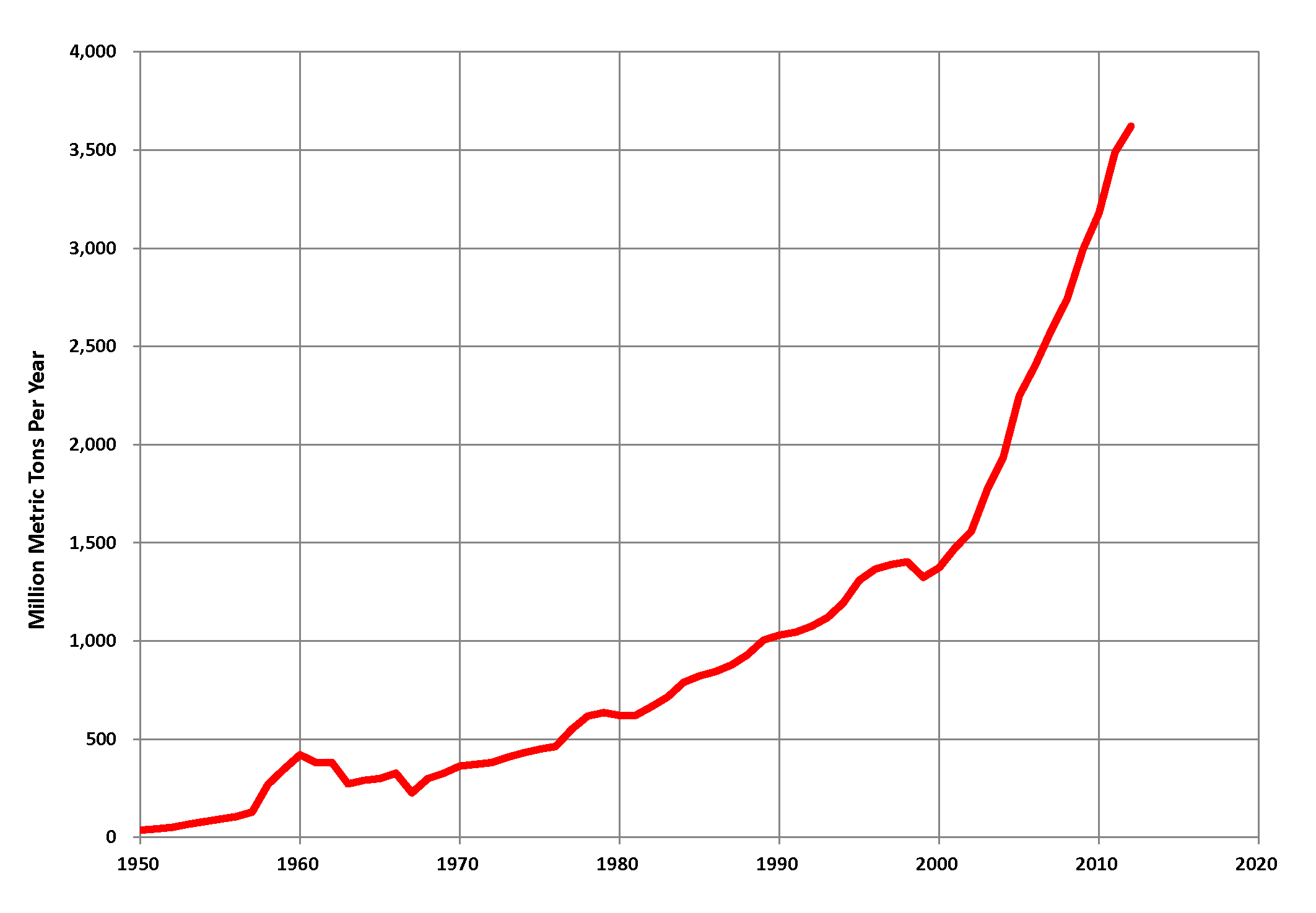 “Coal Production in China: 1950-2012.” by Plazak, 2014, compiled from USEIA and US Bureau of Mines and Minerals Yearbooks. Image: wikimedia commons.

Coal generates 30% of world electricity. Coal power is decreasing in the U.S., but in Asia, specifically China, it is the source of 36% of energy. China recently promised to end financing of new coal plants outside its borders, but concerns remain as domestic use continues. But a new Chinese solar project in Anhui, built on a former collapsed and flooded coal mine, developed by China Energy Conservation and Environmental Protection Group (CECEP) and the French floating solar expert Ciel & Terre may be a sign of hope. Regional plans for sustainable energy infrastructure for Europe, Middle East, and North Africa include an array of renewable energy options.

COP26 Glasgow net zero emissions pledges predict fossil fuel use to peak in 2025, CO2 emissions fall 40% by 2050 – but even that will drive temperature rise to 2.1 Centigrade. Coal is the largest source of energy-related CO2 emissions (He, et al., 2020). If pledges are kept, 13 million new workers will be employed in clean energy by 2030, and double that by 2050 (IEA 2021). Coal is not the only fossil fuel driving climate change: oil is even greater. Of world energy sources, coal is 27%, natural gas is 24%, and oil is 33%. But coal is a focus because it is especially polluting, leading to environmental and health dangers. Renewable energy is increasing, costs of solar, wind, and storage are decreasing. Eight European Union countries (Denmark, Finland, France, Ireland Italy, Netherlands, Spain, Portugal) declared phase-out of coal by 2030.

In an earlier energy transition, the Tennessee Valley Authority (TVA) offered job training as well as worker housing communities. A new town, Norris, became a showroom for household uses of hydroelectricity from refrigerators to toasters.  More recently, the German Coal Commission (GCC) introduced a task force on job transition along with coal plant closures. Retraining coal miners, and workers along the entire supply chain, will accelerate and strengthen environmental justice and energy transition. How can the world move towards sustainable electricity for all?