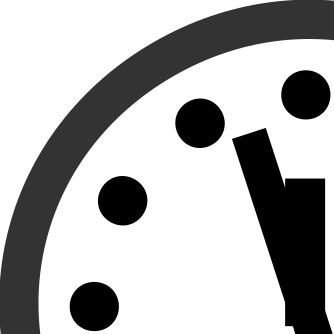 Back in the good old days, when doomsday was just three minutes away. Now, it’s 100 seconds. Time to reset. Image: wikimedia

“We are in humanity’s moment of greatest peril,” warn those who keep time on the Doomsday Clock, moving us to 100 seconds before midnight. Midnight means catastrophic global annihilation. The Bulletin of the Atomic Scientists, founded in 1945 by those who worked on the Manhattan Project, when doomsday only meant blowing ourselves up with bombs, the Doomsday Clock now includes a second danger: “Humanity continues to face two simultaneous existential dangers – nuclear war and climate change – that are compounded by a threat multiplier, cyber-enabled information warfare, that undercuts society’s ability to respond.” (Ban Ki-Moon et al 2020)

Bulletin of the Atomic Scientists, inventors of the Doomsday Clock. Image: wikimedia

The Doomsday Clock does not really tick but is set. It started at seven minutes to midnight in 1947. Its best year to date was 1990, when it was fixed at 17 minutes to midnight, indicating the world was hopeful and relatively calm. The clock held at 2 minutes to midnight through 2017 – 2019, but now it is closer than it has ever been. It’s only been reset 24 times since 1947.

Regarding this week’s setting of the clock to 100 seconds before midnight, the keepers of the clock note two action areas. First, due to expire in 2021, the only remaining bilateral agreement between two nuclear super powers (Russia and USA), the Strategic Arms Reduction Treaty (START), must be extended. Regarding the other existential threat, climate change, over 60 countries have committed to net zero carbon emissions by 2050. While the United States has not committed, California and New York have. That’s encouraging, but it’s still not enough, just 11% of world emissions.

Meanwhile, the clock is moving closer to midnight. Whether or not we suffer a nuclear war or an accident, certainly possible, climate change is not only possible but probable, and accelerating. We need to turn back the Doomsday Clock. What can you do to turn back the hands of time?

Bulletin of the Atomic Scientists. https://thebulletin.org/doomsday-clock

“Why the world is closer than every to Doomsday,” by Jerry Brown, William J. Perry, Mary Robinson, and Ban Ki-Moon. 24 January 2020, CNN.com. https://www.cnn.com/2020/01/24/opinions/doomsday-clock-emergency-moon-robinson-brown-perry/index.html/