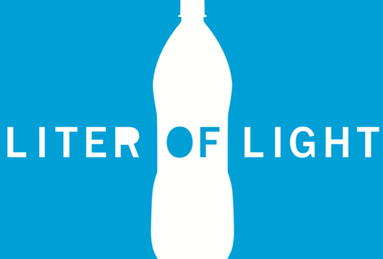 Isang Litrong Liwanag (Liter of Light) is an innovative program in the Philippines using discarded plastic beverage bottles, filled with a mixture of water and bleach, to produce illumination equivalent to 50-watts. Image: wikimedia commons.

Discarded liter bottles have sparked a revolution, bringing light to areas in need of illumination. In the Philippines, a national program called Isang Litrong Liwanag (Liter of Light) utilizes plastic bottles filled with a mixture of water and bleach to produce solar lights, yielding the equivalent of 50-watts of electricity. When typhoon Haiyan (Pagasa name, Yolanda) stormed Tacloban, capital of Leyte, leaving more than 6,000 people dead, the airport closed, and the city plunged into darkness, citizens illuminated homes and streets with the ingenious solar lights. When the Tennessee Valley Authority, whose motto was “Power to the People” made electricity widely available, a new town was built to demonstrate its uses. From toasters and refrigerators, to reading lamps, and porch lights, the town of Norris was built as employee housing for the workers of the TVA. Liter bottles also bring power to people in rural areas where access to the grid is nonexistent or intermittent; it is estimated that 40% of the people in some areas of the world are in such need. Credited with the invention is Brazilian innovator, Alfredo Moser. As solar energy becomes an increasingly important source of electricity for our world, should there be “demo” cities showcasing the power of the sun?