Map of Singapore, from the CIA at cia.gov.

WHY SINGAPORE?
Geography is destiny. In an advantageous position on a strait between the Indian Ocean and the South China Sea, Singapore connects China, Thailand, Malaysia, Indonesia, and India. Winds help: from December to March, the northeast monsoon winds propelled ships from China, Thailand, and Vietnam southward, bringing dried and salted foods, tea, medicine, and silk. After a layover (think profits for restaurants, inns) to await the southwest monsoon winds, the ships were propelled north again, carrying spices, gold and opium. Singapore’s growth and prosperity are due not just to its position but also to administrative policies of a free trade port. Although it occupies a minuscule area (277 square miles), Singapore is a major force in the world economy; at the end of the twentieth century, its gross domestic product was over US$100 billion.

CITY OF THE LION

The Lion City (for that is the meaning of Singapura) was named by a sailing prince who miraculously landed on the island after a ferocious storm, spotted a beast that looked to him like a lion (although lions are not found in Asia), deemed his redemption and vision a sign of good luck, and decided to stay on the island and make himself king. Sang Nila reigned for 48 years. Once an important Malaysian center in the thirteenth century, Singapore’s population dwindled to only 150 people on the entire island. 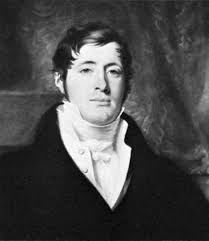 The son of a poor shipmaster joined the East India Company in London in 1795, where he earned just 70 British pounds in pay.  Ten years later, the diligent shipped out to Penang as assistant to the governor’s secretary for the tidy sum of 1500 pounds per year. Two years later, Thomas Stamford Raffles himself was chief secretary.

But it was his next posting where Raffles had the vision that would change history. When he observed the geographic advantage of the Strait of Malacca through which passed many Chinese ships laden with silk and other treasures, Raffles conceived an idea. Could he place the Strait of Malacca under control of the East India Company? He proposed the plan to the governor of Penang, but nothing happened.

Raffles was not one to quit easily. He went over the governor’s head, travelling to Calcutta to see the governor general, Minto. There, he found a kindred spirit. Minto saw the potential in Raffles’ plan but wanted instead to focus on Indonesia. Minto appointed Raffles as his personal envoy, sent him back to Malacca to open talks with the princes of the territory. Minto’s goal was Java, the largest island of the Indonesian archipelago. With Raffles as advisor, Minto launched 90 ships on June 18, 1811. It was a mild and relatively polite entry—no lives lost, no looting. In just 25 days, the operation was complete and Java was no longer under foreign domination but was free to join in any alliances desired, including partnering with the East India Company.

Raffles was promoted back to London. He received a hero’s welcome, became Sir Thomas, and authored A History of Java. But Singapore never left his mind. He returned to the East Indies, re-presented his original plan to Minto’s successor, Lord Hastings, who readily agreed to sponsor the initiative. And so it was that at sunset on January 28, 1819, a small boat glided into the port’s harbor. Two men disembarked and headed towards the Sultan’s palace.

The whole scene was observed by a teenager hiding in the reeds, bored living on his family’s little houseboat and more than curious about these two visitors who looked to be from a different world. Wa-Hakim spied this when he was 15. He was the only eye-witness. But even at 80-years old when he was interviewed by H. T. Haughton, he could recall what the two were wearing, even what food was served by the ruler they visited.

Who were these visitors? The boating gentlemen were from the British East India Company looking for a trading station and port to serve Britain’s Southeast Asian commerce. One was Raffles who was about to realize his dream.

On the morning of January 30, an agreement was signed. Twelve days later, Raffles returned to pitch a tent and soon afterwards moved into a little house.  Within six weeks of Raffles’ landing, 100 ships were anchored in the harbor.

Raffles proposed that the local hereditary chief, Datoo Tummungung Sree Maharajah Abdul Rahman, allow the building of a factory on the island in exchange for certain protection, payment and affiliation. It was an appealing proposition but the chief was then under the authority of the Sultan of Johore, who was affiliated with the Dutch, who claimed the entire region including Singapore.

Raffles dealt with this issue by choosing to recognize, instead, the Sultan’s brother as Sultan of Johore and Singapore. In the agreement, there is made mention of the situation: “whenever the Sree Sultan, who is on his way, arrives here, all matters of this Agreement will be settled.”

Conveniently, the above-mentioned brother happened to be out of town in Penang getting married. The boys’ father died suddenly. Succession immediately was in the reins of Abdul Rahman who was acting Sultan and signed the deal with Raffles.

By the next month, February, the brother returned. Surprised perhaps by what had happened, but finding himself in agreement with the proposed scheme, the brother signed the new treaty of three parties the newly installed Sultan Hussein Mahummud Shah, the Datoo Tummungung Abdul Rahman, and Raffles. It is interesting to note that Raffles represented not the British government but the East India Company. 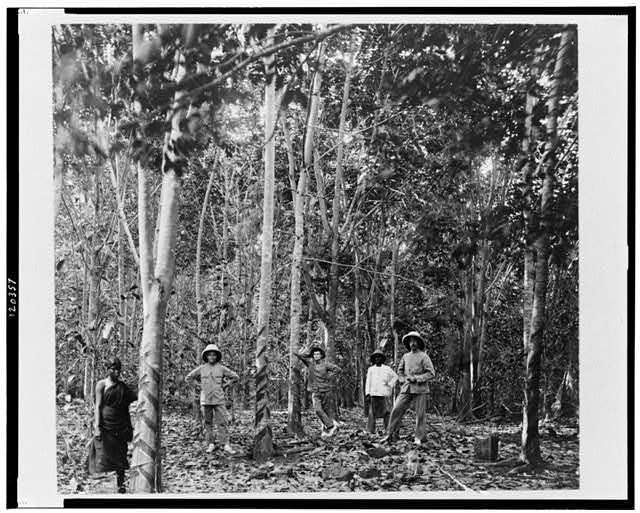 Rubber trees in Singapore, from Library of Congress at loc.gov.

The 100 ships that arrived in Singapore’s harbor six weeks after the free port opened proved a good omen. Growth accelerated when Malaysia’s rubber and tin industries developed, as well as when the Suez Canal opened in 1869. In the four decades following, trade skyrocketed. The island became a self-governing British Crown colony in 1959, and has been an independent republic since 1965. Singapore holds a record for shipping tonnage among all the world’s ports. At the end of the twentieth century, its gross domestic product was over US$100 billion.

The evolution of government in Singapore was curious, as there were no laws per se because the city rose out of an economic agreement. Although Raffles had forbidden the sale of land, he saw the need for some form of real estate acquisition, so he required that land be sold at public auction with permanent lease and registration. Raffles made sure Singapore remained a free port, ordering that no taxes or trade would ever impede growth. There were strict anti-crime regulations, with an emphasis on rehabilitation, including offender payment to the injured.  Raffles gave detailed direction to Major William Farquhar, the aide left in charge of the outpost; instructions ranged from disposition of the brig Ganges to accounting systems of minutest accuracy. An area that used to be ruled by pirates became a highly regulated commercial enterprise.

BUSINESS IN ALL SEASONS

Rather than government offices, after building a fort, Raffles constructed docks, arranged for ships’ stores or chandleries, auctioned land for commercial enterprises, warehouses and banks. In 1822, Raffles turned attention to administration and the development of a town. His plan included specialized sectioning of the city. He mandated each building be made of brick with uniform tiled roofs. More importantly, every building had to have a two-meter covered passageway where commerce could take place unhindered by monsoon rains or sweltering sun.

Because of its geographic centrality (China, Thailand, Malaysia, Indonesia, and India are water-neighbors), ships from all over the region brought all manner of goods and people. As a result, there are four official languages in Singapore: Chinese, English, Malay, and Tamil, but Mandarin may be most often heard. Multiculturalism is also present in houses of worship, which date back to the 1800s: Hindu Sri Mariamman Temple, Buddhist Kuan Yin Temple, Sultan Mosque, Taoist Wak Hai Cheng Temple.

Raffles promoted more than economic exchange. In October 1823, using 2,000 Spanish pounds (then the global currency), Raffles established the Singapore Institution, a school for training civil servants and teachers. It was Raffles’ dream that children of great rulers around the world would come to study here, and that their mutual exchange would bring the spirit of Singapore’s vision of freedom and multiculturalism to the entire world.

Agreement made by the Dato Tummungung Sree Maharajah, Ruler of Singapore who governs the country of Singapore and all the islands which are under the government of Singapore in his own name and in the name of Sree Sultan Hussein Mahummud Shah, Rejah of Johore, with Sir Thomas Stamford Raffles, Lieutenant Governor of Bencoolen and its dependencies on behalf of the Most Noble the Governor General of Bengal.

On account of the long existing friendship and commercial relations between the English Company and the countries under the authority of Singapore and Johore it is well to arrange these matters on a better footing never to be broken.

Article I. The English Company can establish a factory (logi) situated at Singapore or other place in the Government of Singapore-Johore.

Article 2. On account of that the English Company agree to protect the Dato Tummungung Sree Maharajah.

Article 3. On account of the English Company having the ground on which to make a factory they will give each year to the Dato Tummungung Sree Maharajah three thousand dollars.

Article 4. The Dato Tummungung agrees that as long as the English Company remain and afford protection according to this Agreement he will not enter into any relations with or let any other nation into his country other than the English.

On this account we each of use put our hands and chops on this paper at the time it is written on the 4th day of Rabil Ahkir in the year 1234.

Seal of the East India Company  (signed) T.S. Raffles
Chop of the Tummungung

Island Nations: Island nations, such as the Maldives, threatened by rising oceans might offer as their treasure the ocean environment. What provisions of Singapore’s economic and social structure would be helpful to island nations? What responsibilities should new agreements and contracts include for safeguard of the seas?

Buckley, Charles Burton. An Anecdotal History of Old Times in Singapore, from the Foundation of the Settlement under the Honourable the East India Company on February 6th, 1819 to the Transfer of the Colonial Office as Part of the Colonial Possessions of the Crown on April 1st, 1867. Kuala Lumpur: University of Malaya Press, 1965.

Yen, Ching-Hwang. A Social History of the Chinese in Singapore and Malaya 1800-1911. Singapore: Oxford University Press, 1986.

For an overview of Singapore see Library of Congress Country Studies at http://www.workmall.com/wfb2001/singapore or http://memory.loc.gov/frd/cs/sgtoc.html.

*Interested in cuisine? To find out how the mix of Chinese and Malay traditions resulted in a new kind of fare called Peranakan cuisine, see: http://www.go-singaporehotels.com/dining/multicultural.htm.

For pictures of the ancient temples and mosques of Singapore, as well as those of the present day, see http://www.orientalarchitecture.com/singapore.htm.

*For the work of Singapore artists, including Chen Chong Swee, who combined local landscapes and Chinese and European multicultural traditions, see http://www.living2000.com.sg/chenchongswee/biography.htm.